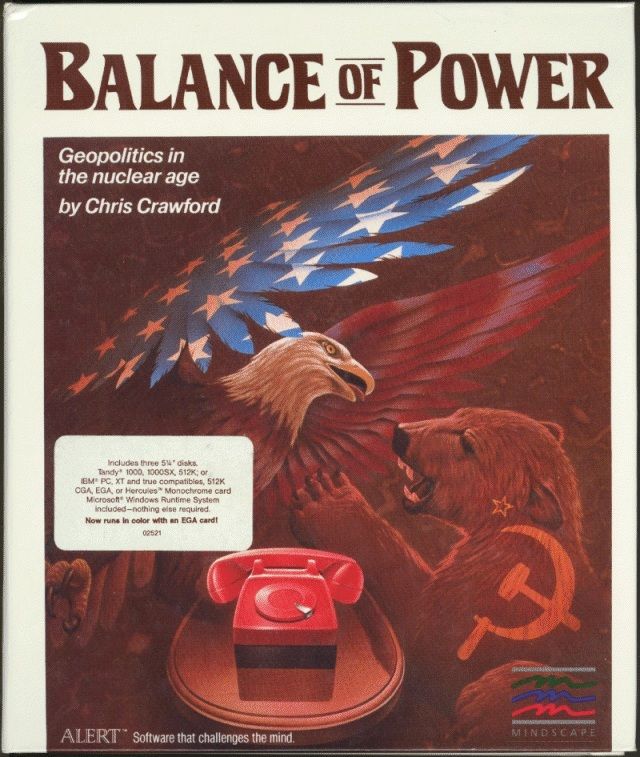 Play online, the famous Balance of Power, a Simulation game, published by Chris Crawford in the year 1985.

Diamond classic of the subgenre "global strategy", one of the first games of its kind, according to many criteria, in my opinion, unsurpassed and still.

The events in the game begin in the "near future" (at the time of release) – that is, in 1986. The world, as we remember, divided into two ideological "camps" and is in a state of Cold War. You are invited to take on the responsibility of either the U.S. President or the General Secretary of the CPSU Central Committee. You have eight years (the game is time limited). And for this only seemingly more time you have to put a final and irreversible end to that lasts for many decades the debate about how the world whose economic system will still "rule the world".

Eight years. Only eight, not a second more. And to make time for it to be just incredibly much. Not so often old turn-based strategy with all the "classic" with their features (including appearance) can boast of such a dynamic. So, our goal is to attain actual power over the world. What we have to do this?

Actually, we have four resources: the industry that is necessary to develop the army, which can someone to scare, and someone to sway, intelligence (logical, either CIA or KGB) with the help of which you can find out what is happening in the camp of the enemy, or make him some sort of trick (not forgetting the fact that he can do the same thing or even something worse), and SHE. Yes, it is a red button inside a black suitcase. It is important to remember, but especially tempted to use no good – the world needs us alive and healthy. Moreover, our overseas "partner" (who we played) is exactly the same, except that he somehow always (alas – always!) a much more hot-tempered than we are, and can use a button because of some nonsense, so we sometimes have to convince him not to do it. Humiliating and unpleasant? Of course, but nothing can be done. Will have to get used to the idea that, firstly, the talks here play a huge role, and secondly- every (every!) his decision, however insignificant and unnoticeable it may seem to you, you must first carefully consider and weigh all the "pros" and "cons". One small mistake can ruin our whole brilliant plan, and this should not be allowed.

That is, we have to play practically simultaneously and in the economic strategy, and in the spy game. The second part should stay a little more (because of the first not much to say – everything is clear: long thoughts, and then their realization on the screen in the form of numbers, if the numbers are large – we are fine). The fact that the world in this game (and it's very good) is not limited to the USSR and the USA, no, there are already 62 countries (if anyone is interested, in 1986, countries have been, to put it mildly, "a few" more, and 50 years ago too, but agree that there are 62 countries for the computer game, and even that time is simply great!)! And each of them is quite a subject of international relations and maybe we or friend, or enemy. Alas, neutral countries do not exist (here), so you need to try to sway as many as possible of their number, and whoever we have chosen as a "protégé", the main attention should be paid, of course, "those who are not undecided" (C) – that is, Third World countries. And for this they will need to negotiate, enter into various agreements, to establish and develop a network of agents in their territory and to monitor closely the scope and, more importantly, the nature of the rebel movement in them.

In this game the rebels play an important role, they have almost any designed to "explore" the country, so their "study" is also important, and then make the decision whether we help the government or the rebels in it, and if the rebels, then what (resistance movements can be a few). Like and looks simple but somehow incredibly exciting (it is the "rebel" aspect of the game). By the way, supported the rebels in the event of coming to power may well us to betray, it is in order...

Not to mention the uncanny historical accuracy of the Balance of Power that only makes the game atmospheric. The game contains a huge number of historical (and for those times – actually "fresh newspaper") information on a whole range of things. What is the population and ethnographic composition of a particular country who is ruled by what parties and movements there are, there are some economic indicators which people are most active and what events are happening – all in the game disclosed in accordance with the real information at that time. The element of "fiction" is minimal, in fact – at the start of the game he even almost none. That is, there is, in addition to the exciting gameplay, and more extensive cognitive element.

About the graphics not much to say. But if you think that here you are again waiting for "something horrible" (especially for those who are spoiled by shaders and stuff like that), I got to tell you in any case. You will find a very beautiful political map of the world, just like in the old Atlas, accurate screens with numbers, where a large font all clearly written, and almost a window (!) the interface messages in which they ask you questions about possible actions, and the response options (i.e. the command is issued). The arrow is, the mouse is supported. Just a fairy tale. Oh Yes: still have the opportunity to play together, so it's not just a fairy tale, a fiction. But to find someone who will agree to play for the President, can be a task all the more fantastic.

Balance of Power is, perhaps, the best, most detailed and probably the most "action-Packed" global "simulation of the Cold War". So if you like "smart" historic turn-based strategy, if you remember that era or are interested in her if you want, at least on the screen of your monitor and at least to prove to myself that things COULD be otherwise - that Balance of Power will be a perfect way to diversify and occupy your time.

PS: still, remember: if something is red button features.

Have you ever wondered what kind of video games were played in the good old days? Try playing Balance of Power online now and we are sure you will not stop playing again.