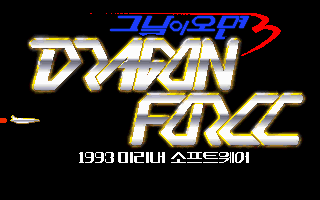 Do you want to relive your good old memories? Play The Day 3: Dragon Force again, it’s a perfect DOS game launched in 1993 and a must-play for all video game lovers.

Korean hand-drawn flying game in the style of anime, which is, apparently, part of some game series (once "The Day 3"), but the details of this are unknown.

The game is made in South Korea, so it is partially in Korean. This is bad, because there is a description of the background written on it, and understand it does not. That understanding was possible: the action takes place on Earth, destroyed by war, ended by the application of a super-bomb called "Arcadia" (what a bomb against anyone who applied - is unclear). However, almost immediately after the Earth is attacked by aliens race Kemberly who need the secret of making this bomb. In the fight with them come three greatest pilot of the Earth...

Indeed, there is an opportunity to choose one of three characters to pass: Jeong'Korean and American Jennifer and the German Siegfried and which, in addition, different characteristics of the combat fighter: someone more powerful, but rather slow, someone – on the contrary. There is also the possibility to configure the degree of participation in the game some substance under the name "Powerup", which increases the firepower of a fighter and protects it, but it can cover the entire machine or just fly together; the second mode is, of course, much harder to pass. Each ship has four weapons, two of which can be improved (the weapons are the same for all heroes): cannon, heat ray, bomb and secret weapon earned in the middle of the game; to switch between different views at any time.

In addition to enemy ships, in the air, meet the friendly "supply", which replenish ammunition and armor. The levels are quite large in length, bosses, naturally, are present, and they should be praised for the appearance and can even be called sophisticated; at least, the tactics of the battle with some of them different. It may also be noted that on some screens the enemies are just incredibly a lot, some almost not at all. Initially the player has five lives, but, unfortunately, losing them is easy enough. Earned life set a certain (and relatively high) number of points given for killing enemies.

The graphics in the game, as has been said, are drawn in anime style and really very beautiful. But here is the place to be not only high-quality drawing – often the action level is not confined to the screen, not only horizontally, that is clear, but vertically, it is possible to rise above the line of the screen, for example. Also in many games the ground suddenly appears a serious hint of three-dimensionality: not only that such beautiful landscapes and look and enemies sometimes have the habit to arise as if from the depths of the screen. Effects of explosions and gunfire filled the glory, however, in some fights with them is clearly overdone.

Overall – very good and interesting flying, albeit in not quite usual for most players style.

Want to play The Day 3: Dragon Force online now, play it on your browser here.