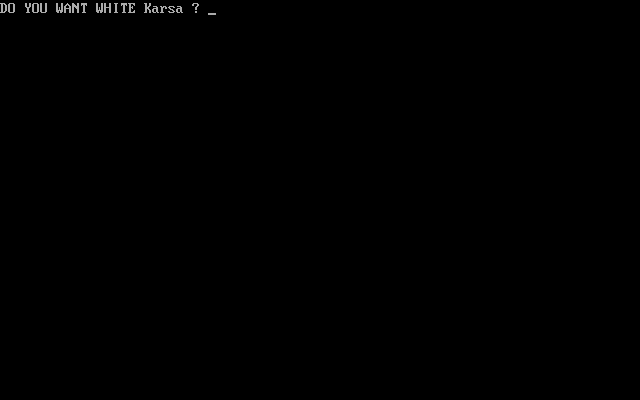 International PC Owners developed a Chess game in the year 1981 called Chess. You can play it online now.

Attention fans of intellectual tasks offers the oldest Indian game chess, made on a fairly ancient language basic for the slightly less ancient Disk Operating System (use DOS). Notice that for the most curious to the distribution of the game attached the source code in this programming language. Actually, it's one of the first implementations of chess game for PC developed was in March 1980 and is adapted to IBM PC in December, 1981. It is also likely that this is the first chess game working in DOS.

Graphics made in ASCII art with captions - thus the pawns are marked with smileys, and the rest of the figure is displayed with titles in English. All graphics black and white, respectively, the former then in the course of black-and-white and monochrome monitors. The moves in the game are entered at the keyboard. Multiplayer is missing, you can only play with the computer, and before parties are invited to choose his level of play.

The peculiarity of these chess is that you can during the game to rotate the Board, giving effect to the computer, change the arrangement of the figures and to produce other out of game action. Due to the abundance of more modern and convenient learning chess programs data characteristics of the game can be useful is that interested in how their development for the PC. Also interesting to see what division could play the computer, the trained talent of the programmer of the late 1970s. Still remember that the first chess program appeared in the 1940s at the Los Alamos computer lab, albeit in a limited form, one to the king, knight and pawn without the right transformation.

Now, play Chess online for free on your browser and make your boring weekend fun and full of entertainment.