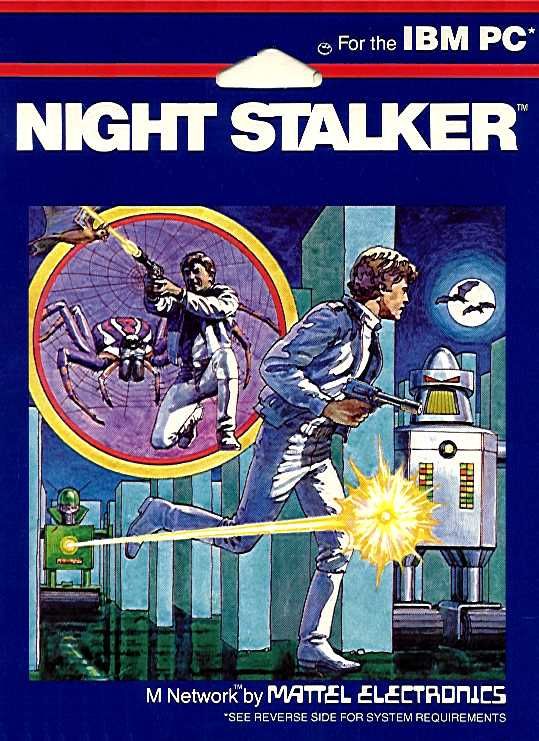 Game Night Stalker in essence, is a ported PC version of the game arcade Berzerk. PC-version of the ancient game, released in 1983, was discovered recently and is literally a miracle. Unfortunately, we have to acknowledge the fact that this is the most rare and collectible value and is its main advantage. The game is wonderful and exciting, but are unlikely to be able to surprise at least a little experienced in the issue of the old games person some innovations.

The plot itself is not - we are informed that our hero (armed man) caught in a dangerous maze populated by hostile robots of various types, looking including bats and spiders. Naturally, it is possible to conjecture anything about the future world and the struggle for freedom, but it is hardly worth it. The game is on top, the figure of the protagonist is very conditional.

The meaning of the game is to kill all enemies on the level (all level three) without dying in the process himself (and any contact with the enemy then leads to death); for killed enemies you get points. As weapons used, apparently, some kind of gun with limited ammunition. After the ammunition is expended at a random location on the level map, a new gun, which first need to reach. The pace of the game is not as fast as on slot machines, but still sufficient, so it is very simple it will not name. There is, however, the possibility of a number of settings, including primary ammo and the number of available "lives."

Graphics is only CGA, appearance, as already indirectly mentioned above, is extremely minimalistic, however this game it is only good as it allows you to really feel in a dark and sinister labyrinth, where every corner can hide death... Yes, Night Stalker is really in its own atmospheric and exciting, but the true value of it, again, in the tremendous rarity - to find her anywhere else on the Internet you can hardly.