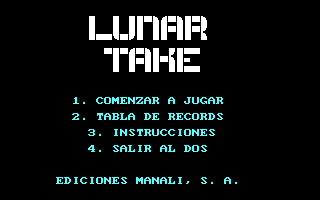 Ediciones Manali, S.A. released a DOS game named Lunar Take in the year 1989. If you are interested in playing this Arcade online, then click here.

The old version of the game Rocket Lander. The game is a huge rarity and printed only in Spain, so in Spanish (although the text in it is only on the first screen, but still to read it will be useful).

The player's task is at first glance quite simple – driving a small spaceship to land on the moon. However, it is not so easy, since the ship first interfere with meteors and acid clouds (of course, you now want to say, but it's a game), and then the mountains to hit, and, of course, the enemies, the SELENITES, who are not happy about the intruder. Plus, the amount of fuel the ship is limited, that is fit to make preferably for a certain period of time, otherwise the ship will just crash to the surface and break.

The game has several levels, each of which the game is complicated. The player has three lives. Graphics, unfortunately, not amazing (and that's an understatement) – more than probation, bleak and minimalistic, but this in no way detracts from the game its charm. In the first place interest it is, of course, to collectors of curiosities.

Enjoy playing Lunar Take online, it can be played on your browser and is free.