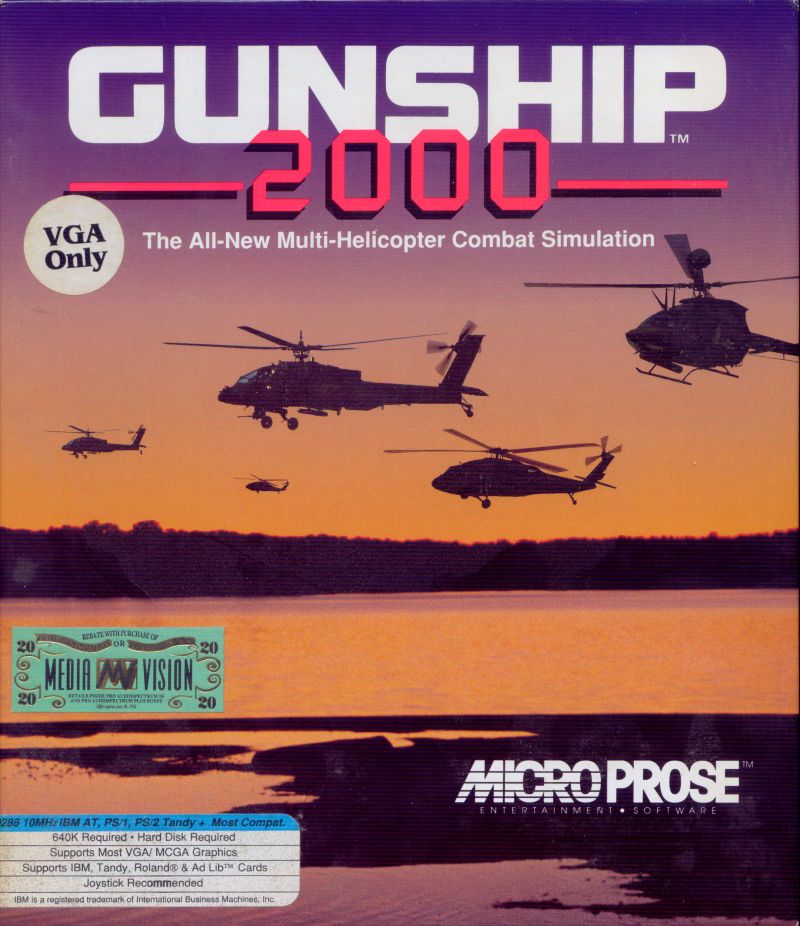 Erbe Software, S.A. developed a DOS game in the year 1991 called Gunship 2000. In the video game ranking, this game ruled the charts for a very long time. You can now play it again online by clicking here.

In the early 1990-ies as among fans of rotary-wing aviation, and casual gamers was a very popular game LHX Attack Chopper from Electronic Arts. Simple flight model of the helicopter and easy control of weapons and interface and excellent VGA graphics attracted players of all types in this new wonderful world of three-dimensional flights of the latest samples of rotary-wing technology.

The game Gunship 2000 from MicroProse, the company is, in fact, pumped and improved development of the LHX.

What this product differs from a true legend of the genre of helicopter?
And the fact that when a similar graphic component (polygon graphics) this was released a year later, the game has a much deeper and broader content.

First, this fleet is available to control the helicopters in the game if EA gave us a choice of 4 cars, including a fictional helicopter of the future, in Gunship 2000 to the familiar Apache and Black Hawk added a reconnaissance Kiowa and Defender, impact Cobra, and abstract LHX was replaced by a tangible Comanche. Moreover - Apache here is both standard and Longbow, the one with the radar. "Osprey", true, removed, but especially because of this, experience is not necessary. Remember how often you have flown on this transport convertiplane in LHX Attack Chopper?

Thirdly, there is the physics and realism of the game at the highest settings of realism control of the helicopter more like real life; for example, if you are too sharply lower the nose of the helicopter, you, in addition to increased speed, there is a risk of losing height so as to present rotary-wing aircraft, you will need to balance at a particular pitch angle for a clear implementation of the straight flight without changing speed and altitude. And then missiles with laser guidance is much worse induced in the fog. In Gunship already has the beginnings of the implementation of realistic weather conditions, including wind.

Fourth, now you have a real combat helicopter, there was the shooter - he fulfills the role of AI - and you have the opportunity to entrust him with managing weaponry and defensive systems. Besides, he still has his digital voice - the sound in this game is much better than the LHX: now supported not only Adlib, but the Sound Blaster.

Fifth mission now, not a single job, as in the LHX, and share the campaign. Diversity of jobs is also off the charts is the intercept and the columns of tanks and search for important purposes, and exploration and transportation of troops. In short, a large part of what they do in real life, real pilots of the army aviation of the United States.

Moreover, Gunship 2000 is of great importance is the development of your character: you can, for example, when you create a new profile to choose your future subdivision, and if the LHX for the successful fulfillment of tasks in addition to the new ranks you are, in fact, received the figs with butter, here in addition to some sort of ranks you have access to new, more expensive helicopters (two versions of "Comanche" and "Longbow Apache"), and - most importantly - in the future you will give to the subordination of the young pilots in your wing, and you'll make commander. And if before flying to the LHX you could just look at the map, without changing anything, in this simulator you can develop a plan for job execution, setting a waypoint movement, ambushes and interception.

In addition to the pilots of your squadron, you will be able to count on the support of artillery and fighter aircraft of NATO air forces.

Sixthly - the scene is now more diverse. In addition to worn-out deserts of the Persian Gulf and the plains of Eastern Europe, you can fly even in the snow of the Antarctic, which is on a par with the Philippines came with the add-on, Islands and Ice. Also there was a marine operation. Finally, you will be able to work with helicopter. Opponents here at plus-minus are the same as in LHX, - tanks, APCS, SCADA system, various air defense systems, including ZSU and MANPADS. Enemy aircraft are represented by MiGs, "Crocodiles" and "Gazelles".

And finally, seventh, in Gunship 2000 and LHX comparison with you will find there such useful things like the mission editor and the replays of your losses.

Overall, Gunship 2000 James M. DEA is well-developed at that time, helicopter simulator, developing the ideas contained in the original Gunship 1986 the legendary Andy Hollins, coupled with nice graphics LHX Brad Aroona, with the addition of lots of new chips and buns.

This game is the pinnacle of helicopter series from the company Sid Meier. Even Gunship!, released 9 years later, was much simplified, arcade and cut down the product compared to the two thousand version.

Want to play Gunship 2000 online now, play it on your browser here.