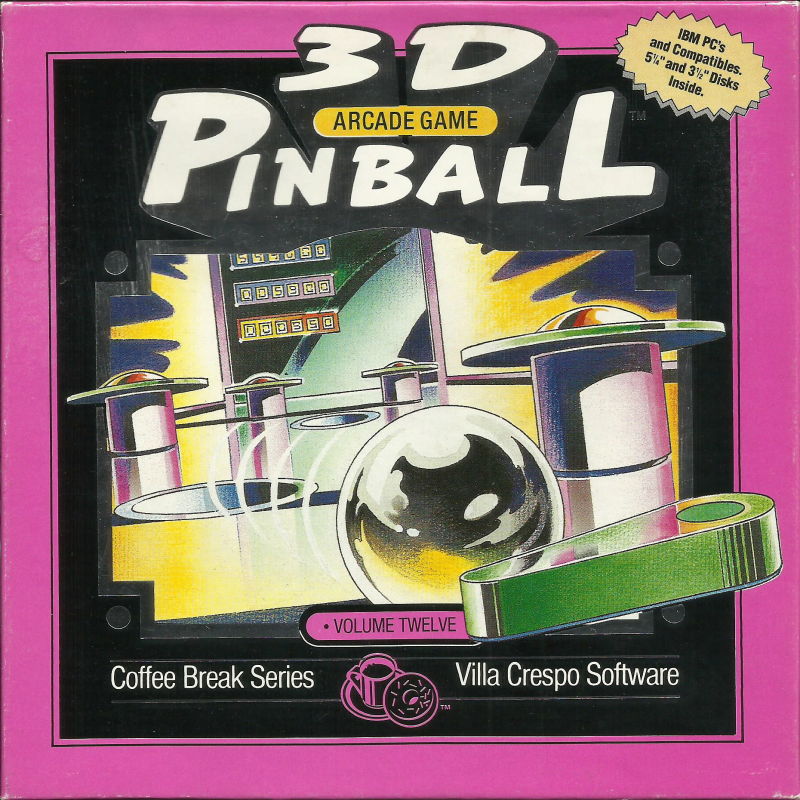 Villa Crespo Software, Inc. released a DOS game named 3D Pinball in the year 1992. If you are interested in playing this Pinball online, then click here.

In the budget the collection of "Coffee Break Series" from the American company Villa Crespo Software met a lot of interesting things, very serious and high-quality, in spite of its causality, whether abridged versions of full-sized gambling or created specifically for this series (for IBM PC) original works of Terry Hastings or John Como. However, a few wormed their slender ranks purely arcade games that are imported from brotherly UK (under the slogan of "Brothers across the ocean" thanks to cooperation with Microvalue, former Flair Software), besides that already by the time "bestow" a considerable number of other platforms, and could not boast any particular merits.

"3D Pinball" authored by William Wigham (created, apparently, for Tynesoft; in addition to the main developer of the project involved only the artist Philip Nixon) is trying to stand out a conditional three-dimensionality: a box with the game promises us the possibility – "for the first time in history," Yes, you can play pinball with the term "first-person", that is kind of like the "eyes" of the ball. Alas, in fact, everything is rather dull and depressing; from the convenience and friendliness to the casual user, so typical of private development of Villa Crespo, there is no trace. The game – like many other works Microvalue – can not save even the final table of points, not to mention the initial settings each time at startup, we are required to enter the number of players (one to four), indicators of speed and acceleration of the ball (which can take exactly the same values; the second of these characteristics is responsible for the magnitude of the effect of obstacles on the further trajectory of motion), and enable or disable sound (which is still implemented here forces only PC Speaker and hardly deserves the kind words).

The actual "table" – of course, only occupies the left half of the screen: the picture of some sportsmen, apparently the players in American football (which is not only not motivated, but somewhat strange for a British product). The upper right part is a list of the scores of four players (even if the pinball is running in single mode), together with the current holder of the right moves. Trying given four ball; the spacebar key is used for starting, "Z" and "M" for respectively the left and right flippers, and the "X" and "N" for two "air jet", when clicked, displayed on the sides of the table players and performs the role of tilt-mechanisms, that is designed for the attempts of some to reject the movement of the ball to the side.

The most notable element of the interface is the bottom right part of the screen: the same "surround view on behalf of ball," showing a close-up of our "protagonist" and found in his path tunnels and bumpers. Unfortunately, due to the simple design of the table is nothing special these last is not present, and look very simply and schematically; however, as at least some entertainment can be somewhat increase the "3D" window by pressing the F1 key, thereby hiding the normal view on top of the whole table (and Vice versa: by using the F2 pseudo-image can be optionally disabled, so that such does not interfere with the player to concentrate on the usual control of the ball).

The result is disappointing: in spite of all attempts to depict some three-dimensionality, EGA graphics looks pale and dull, and the prospect of "pinball first-person" is not able to hide the paucity of the table, so playing "3D Pinball" is simply uninteresting. Recommended only to collectors of pinball. and just curios.

Not sure how to pass your time, why not play our classic videogame 3D Pinball online? And the best part, it is for free!