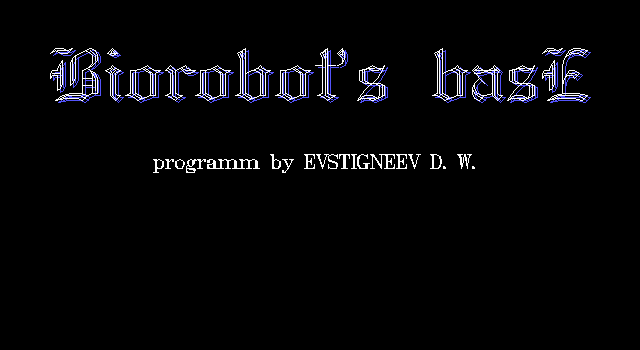 A very interesting DOS game was released by Evstigneev D.W. in the year 1994. The game was called Biorobot's Base. You can now play it online.

A very interesting domestic project of the mid-1990s, until recently absent on the Internet. Mostly inspired by games Delphine Software (Another World and Flashback).

The plot is quite simple - walking in the woods a man is kidnapped on a space ship anthropomorphic biorobots, the ship crashes on another planet, surviving people and explores unfamiliar territory, avoiding contact with the hostile fauna. About the middle of the game the main character meets a girl Vicki, in every way helping the protagonist. Together they must free the remaining kidnapped by the biorobots of people and return to Earth.

The gameplay is a action game, combined with advenchurnyh elements. Character control is quite simple and intuitive - the "arrow" for movement and the spacebar for action (often shooting was found on the basis of the bio Blaster).

It is worth noting a rather high complexity of the action segment. Sometimes the passage of a certain time can be non-obvious to the player. Also, some pieces require as strict timing, and some tricks (for example, immediately after the transition to the next screen hero disintegrates the enemy shot Blaster; to avoid this, you need to pre press and hold the attack button). Fortunately, the author Biorobot's Base - Dmitry Evstigneev wrote a detailed solution, which also includes some clarifications to the story. Moreover, there is a password system (in the style of console games) to save progress.

Biorobot''s Base uses a special vector engine, sometimes even trying to create some semblance of three-dimensionality. Of course, the graphics detail and number of colors is not Another World/Flashback/OnEscapee, but in the pros it should be noted badly made animation cut-scenes (without rotoscopia!) and high in-game resolution. Key points of the plot are accompanied by specially drawn illustrations, which look quite reasonable, with emphatic austerity of the visual style. The sound is limited to three tunes (main menu, battle with the biorobot-telekinetics, the ending) played on the PC-Speaker E.

In General, for created by one person actually the game is very, very bad. Enthusiastic domestic igrostroy - recommended to fans of the aforementioned titles - you can try.

Have you ever wondered what kind of video games were played in the good old days? Try playing Biorobot’s Base online now and we are sure you will not stop playing again.