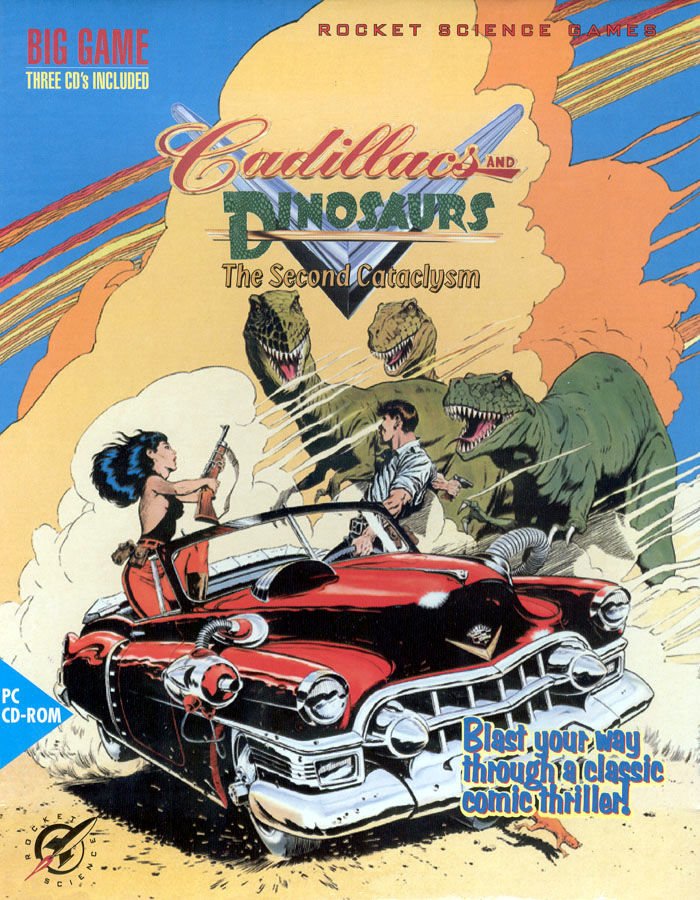 BMG Interactive Entertainment developed a DOS game in the year 1995 called Cadillacs and Dinosaurs: The Second Cataclysm. In the video game ranking, this game ruled the charts for a very long time. You can now play it again online by clicking here.

Virtual shooting gallery on a very little-known in our corner of the world "Cadillacs and Dinosaurs" created by the imagination of Mark Schultz and embodied first in colorful comics, then bytemap games, the animated series (which, alas, we never showed), and later in the game.

History "xenozoic era," and that was the name of the original comics, I must say, amusing. In 2020, our planet was a terrible cataclysm, which resulted in most of the living creatures died, and the remnants of humanity have moved underground. After some (probably considerable) period of time, people still came to the surface and found that it has radically changed: on (and on) it reappeared long ago extinct members of the ancient megafauna, such as various dinosaurs, flying lizards, cave bears and so on. In addition to "historical" animals existed and monstrous mutants like giant snails or millipedes. And the main thing - people learned that were not (and may never throughout its existence), the only intelligent species on the planet, it turns out, there are still Grita. Grita is race low green-skinned humanoids, resembling anthropomorphic frogs. They have a very high level of development (both technologically and in magic terms), live mostly underground, but often go to the surface, not able to communicate verbally, but have telepathy; people are not that hostile, but very wary.

Gradually emerge on the surface of the planet, people began to re "development", which naturally led to the emergence of various factions, clans and wars, skazavshim adversely on the environment. The most important lesson of human communities in the world 2500 years is the search for different technological artifacts of ancient (for them) times that you can use to consolidate their own power, and the most valuable experts are considered to be few representatives of "the caste" "of the mechanics of Scarecrow" (old blood mechanics), from generation to generation keeping a lost technical knowledge (e.g., car repair) and for some strange reason is able to telepathically communicate with grit.

The main characters of the game (as well as comics and animated series) are just a mechanic-Scarecrow (and part of a very cool guy) Jack Tenrec and his girlfriend Hannah Dundee. Jack gets off of the shaman grito warning: fragile balance of forces of nature, established many years after the cataclysm 2020, will soon be destroyed because of mindless gang activities on the reconstruction of the giant machinery that will inevitably lead to a new, even more terrible cataclysm (which is referred to in the title of the game). To prevent this, it is necessary to stop the terrible evil Wilhelmina Scharnhorst (one of the main negative characters in the original stories) - a gray-haired aunt, the superior weight and physical strength most men. It should be noted that the external style and the atmosphere of the world, C&D are quite similar to the so-called pulp-novels of the first half of the twentieth century, popular in the period before and immediately after the Second world war - that, despite the abundance of funny stamps, probably very much please their fans.

About the game itself, unfortunately, can not say so much. This is a virtual shooting gallery in the third person, made by the same people that earlier had released a controversial thing called Loadstar. For nine levels, among which, besides the jungle, there will be underground tunnels, will control a red Cadillac and fight through its onboard machine guns (or rather, that through the sight) with different creatures and just the "bad guys". Since we have a virtual shooting range, then moves the car forward automatically, however it turns right and left, and, of course, manual control of the firing process. As mentioned in the previous game, same developers, sometimes the levels will meet the difficulties which you have a very limited period of time (a couple of seconds, relatively speaking) will need to choose which path to move on. And it is very desirable that this choice was correct.

The car together with two of our heroes explodes not from the first damage - she had a certain "margin of safety", which, incidentally, is compensated by bonuses - illuminated crystals, as well as a number of "lives" per se. Please note that the dangers in this game quite a lot, and not all of them animate. Yeah, have to face with dinosaurs, the most mutated arthropods, or with the bandits (though beasts in the vast majority of easier and more correct to try to avoid - you can kill not all, but a collision with them can even reduce the already limited time on each level), but at times equally dangerous are rocks or stumps, which have a risk to face, and which is therefore very desirable in advance destroy from the same guns.

Graphics, to be honest, is not impressive; rather, encouraged by the attempt of imitating the comics, but the image is still real blurry. But very beautiful - and in true comic style filled with hand-drawn animated inserts. It is a pity that they are mostly show - and in all the terrible details - a variety of the death scene of the main characters (e.g., in the abyss or in the jaws of a hungry Tyrannosaurus Rex). However, oldhamers to "weak" schedule and doesn't get used: the saddest thing on this thing in terms of opening the eyes locations is relatively monotonous, if complicated, it's just not the best control (here just in case it is worth noting that the longer we hold down the shooting - the more powerful will be shot), and most importantly - how a virtual shooting gallery offers virtually no "zest". So in terms of atmosphere - it's great (especially for those familiar with the original), in terms of gameplay, alas, but high average.

Play your all-time favorite Cadillacs and Dinosaurs: The Second Cataclysm free on your browser here.