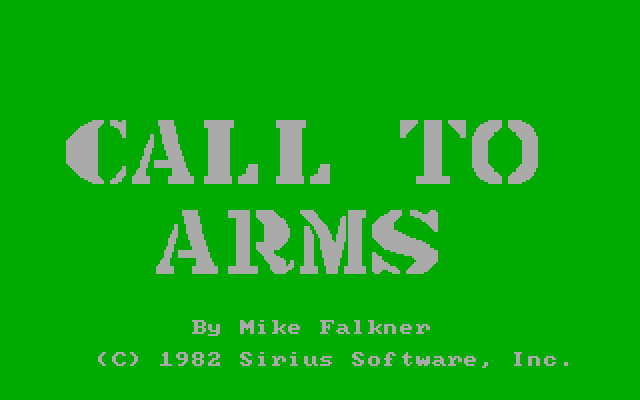 A DOS game was developed by Sirius Software and then released by Mike Falkner in 1982, the game was called Call to Arms. Now you can relive the memories by playing it online here.

Call to Arms – another common strategy, working on greatly simplified the mechanics of the Board game Risk!, koi in the eighties were released packs. Against their fellow genre does not stand out, which is very surprising, since a year before her Sirius Software has released a wonderful ruskolon Dark Forest (exclusive for Apple 2).

The choice we are offered two scenarios: Europe during the Second world war and England sample 1750; they differ, however, only the shape of the playing field. In any case, the card "cut" into ten regions, which, in turn, divided between the existing parties to the conflict (up to four participants as human vs human and human vs computer). Also each player has a number of troops (installed at the beginning of the party), evenly distributed controlled territory. Unlike the original Risk! in Call to Arms, the army is not divided into types (infantry, cavalry, etc.), but is such a "homogeneous mass".

The gameplay is turn-based, two-phase moves. First we get reinforcements, and distribute them occupied regions, the second optional battle. You can only attack land bordering directly with your possessions, and the fight continues as long as the number of defending or advancing is not equal to zero, in this case the territory is the loser goes to the winner, and painted in its colors. However, the battle can be interrupted at any time, to avoid unnecessary losses. The more occupied regions, the more points of reinforcements. In fact, as you've probably guessed, the purpose of the Call to Arms is to achieve full control over the playing field among the participants. There is also a random event, particularly one – diversionary actions of the guerrillas, which somewhat reduces the strength of your army.

This, perhaps, will finish the description. Call to Arms is easy to learn and fairly short, perfect for killing time on breaks or for fun with friends.