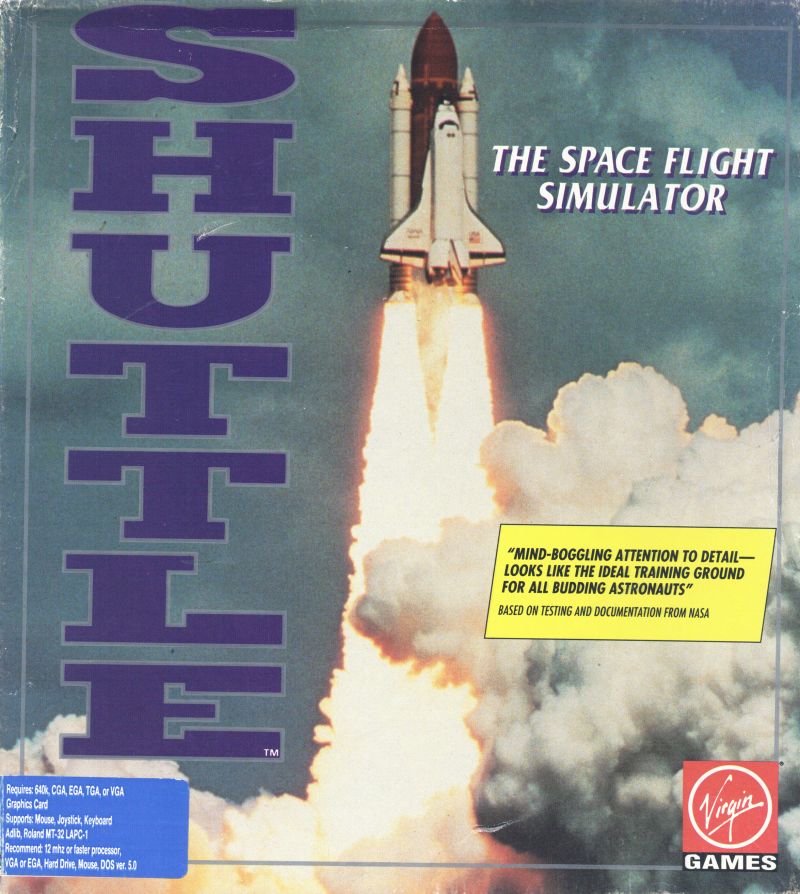 Virgin Games, Inc. developed a DOS game in the year 1992 called Shuttle. In the video game ranking, this game ruled the charts for a very long time. You can now play it again online by clicking here.

Click and flames engulfed the platform of the cosmodrome, cameras clicked at a furious pace, the material went to press. And now remain somewhere behind the hazy outline of Cape Canaveral, and in front of the endless black void...

The genre of this game – Simulator. Yes, with a capital letter. Even after one hour in this miracle of all the other "simulation" of aircraft, helicopters, tanks and submarines, the management of which we love to complain, seem to be just child's play. This is a real simulator, and, in General, the only of its kind - a space Shuttle simulator.

"Click" is just what we think here on Earth. Behind this word there are thousands of all kinds of teams, thousands of actions that we need to make astronauts throughout its long flight.

Nine control panels in the cockpit. In each – plenty of buttons, levers, counters, screens with letters, numerals and symbols, and what-if not uncertain. None of this here is simply not true. All for something you need. One mistake can cost the lives of the entire crew. Management should be efficient, and inefficiency is unacceptable.

The game includes a number of missions (by the way, very (for us) unusual), and if you do not use special options "scroll time" period, one mission may take a few days. The option, by the way, will unavoidably sometimes have to use, why will find themselves.

To play without a manual is like reading Chinese newspaper. And the manual for this game such that would envy and some books. But the impression that it was already experienced astronauts, because I, for example, not everyone is still clear, although General information about control panels, I mastered. The amazing thing is that to play it... scary. Not painful, not interesting – scary. Panel with a bunch of elements, it turns out, can scare even worse than toothy monsters around the corner in the dark corridor. In this cold world of black space no threats to species of aliens and an unknown radiation, but there is another, much more real and terrifying – the threat of the crash of the Shuttle, if something goes wrong. And you're absolutely alone in this vast black sea – no one will lend a helping hand. Incompetence is not welcome, but the choice will have to do.

The choice is to play or not and if Yes then who. To describe now all the game options there is absolutely no sense: first, it would take an undue amount of space, and secondly- I still have a manual transmission, thirdly I still will not tell the tenth part of possibilities of the game. Stop finally on the other chart. She is beautiful, as far as possible in 1992, can be a lot to look at (for example, at the start of the Shuttle with a third person). However, most of the game will have to look at the instruments, which, although drawn very clearly (how else?), but produce slightly depressing.

My opinion – you can play only if mentally prepared for what will have a lot to learn. It's a Simulator with a capital letter, nothing like the game industry did not know either before or after (about the various "Space Station" if suddenly played completely forget), so training will have to start from scratch, and once – in what is called "the field". All myself, no assistants. However, this is a great chance to test my patience and perseverance: the cosmos obeys only to the elite.

PS: Just one advice: if you ever decide to play, don't look out the window. You (unless you're lucky and this time there will not be Land) will not see anything but black. And it is better not to see...

Not sure how to pass your time, why not play our classic videogame Shuttle online? And the best part, it is for free!