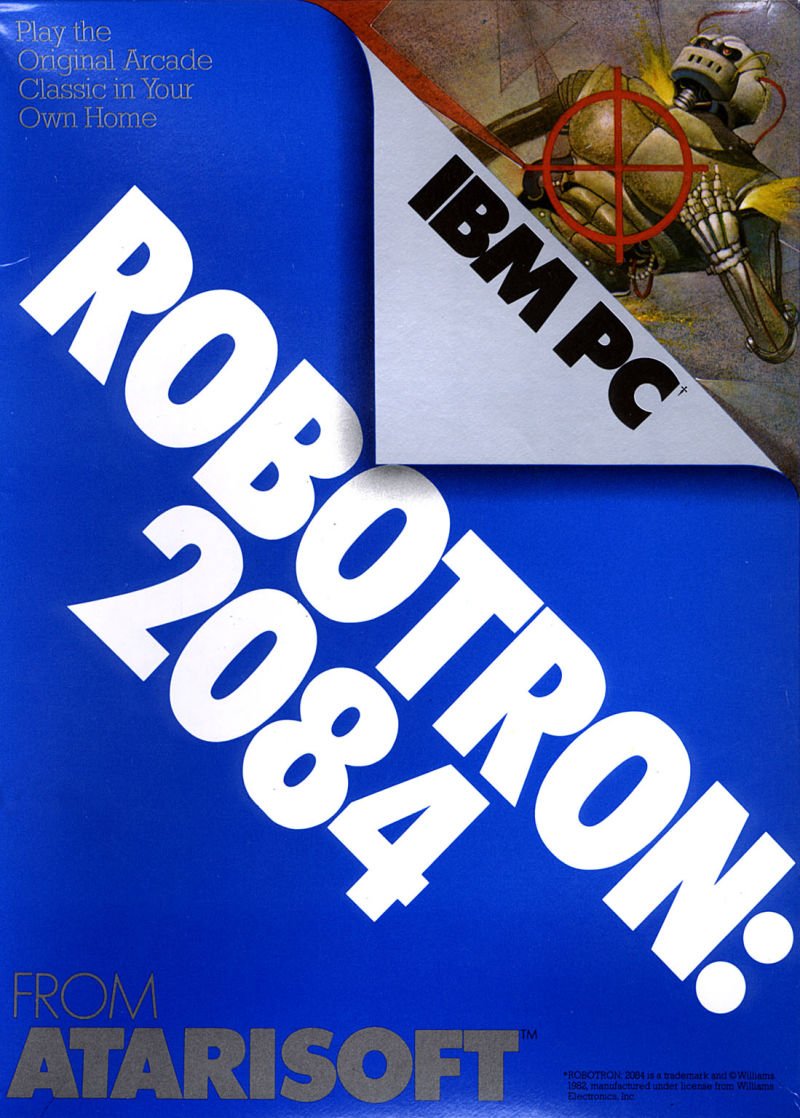 Do you think old video games are boring? Play Robotron: 2084, it is a Top-down perspective game developed by Atarisoft and released on DOS in 1983. You will then know that you were wrong.

Your hero - a mutant, living in the distant future. His mutation is the ability to generate from his own body beams of thermal energy and shoot it in eight directions (which is reflected in the game, of course). In a world in which he lives, the people for the formal security of the mutants created mechanical monsters Robotron's, which, as you may have guessed, rebelled against their creators, and now only our hero-a mutant, could rescue mankind.

The essence of the gameplay – destroy the robots and rescue people. It is important to note the following: you can't kill people in this game – only robots that can kill you and people. In practice, this means that we don't need to worry about is not to accidentally hit the person even if it happens, nothing bad will happen. So the game is "high" in its purest form – just as fast as you can shoot at anything that moves, completely eliminating any brain activity.

Robotron's to look not the same (then again, it is worth remembering that you don't have to remember how to look in the game people): the enemies here are a lot of types. There are Grunt's (a robotic foot), we have a smart Brain you who know how to transform into immobile, but very powerful tools Progs, Spheroid''s dangerous because can create Enforcer's, shooting fireballs, and Quark', very powerful enemies (for killing each give a thousand points), creating tanks (Tanks), which are dangerous in ranged combat (firing powerful projectiles), and in the middle (can just move you). And yet there is Hulk'and which, like one whose name they wear, can't be defeated at all - only temporarily detained with the help of laser beam.

On each screen it is necessary to destroy all the enemies, except Hulk's, and save the largest possible number of people. Screens only a few hundred, but even if the game "go", it will start again, but each screen (even most) will be complicated - that is, the end of the game there can not be. Already from about the fifth to tenth screen begin serious difficulties – many enemies, the action is just nonstop. But here there can be no strategy, tactics, planning, reflection, ideas – anything, except for simple non-stop "stupid mochilova" based solely on your reflexes, which by the twentieth screen (if it comes to it) should go into the category of unconditional. In General, to describe this game is impossible – it is necessary to play to understand all its charm and Majesty of the Holy in its external simplicity.

The graphics are 1983 for DOS, which means tiny polutsvetnoy models and black square instead of the background. But personally I thought it differently just have no idea; as you know, then it was released a lot of games "on", all with far more beautiful graphics, but none of them are anywhere close to the brilliance of the original. He's great in this form – dark and minimalistic, when no one and nothing distracts from the senseless destruction of moving objects and the feeling of joy that finally can be nothing to think – only to relax and to get real hardcore pleasure from the truly old and truly a great game.

Verdict – deserved perfect score and recommendation is to play all without exception.

Want to play Robotron: 2084 online now, play it on your browser here.