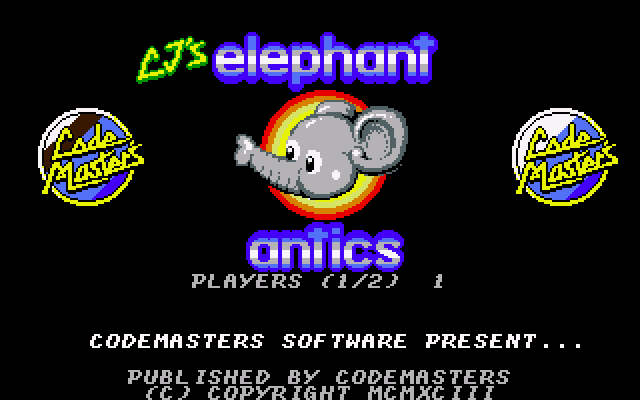 The famous developer Genesis Software created CJ's Elephant Antics in the year 1993. It’s a perfect Action game and can be played online by clicking here.

Wonderful and even a little "touching" arcade game at first sight can seem to someone the nursery, however, more than suitable for even the most "adult" players.

Her story can be fit into one sentence – CJ, a young African elephant, was kidnapped by poachers and taken away very far from home, but managed to escape from prison by jumping out of a plane on which he was transported to the zoo. Only bad thing is that to fly from their native places the plane has already very far away, and our hero was straight in such a strange and terrible Europe... Now his task is to get through five huge levels, including various areas of Europe and Africa, on the way to home. And in this he was, of course, will need your help.

The road to his native Savannah inhabited by a huge variety of enemies, however, almost all of them can not be called a terrible – except that funny (I only need a giant frog, for example!). Because the action takes place, as already mentioned, in Europe and Africa, and some enemies are "consistent with" the location: for example, lions in Africa, and angry gendarmes in France (although in Switzerland you can do the penguins – is unclear). Of course, at the end of each level, the elephant will have to fight a boss.

The enemies you can fight, let the weapon of our hero is more than unusual: infinite ammo peanuts (!), which he shoots from the trunk. There are more serious weapons (which the game is not so good) – "smart bombs" (of course, decorated in the best traditions of the old foreign cartoons), but in early game they are very few; but then you can find more to pick them up, which is good.

Elephant, unfortunately, still small and weak – he could die from the slightest exposure to the enemy. Number of lives here, it would seem, is quite significant – at the beginning of the game we have nine of them, but after a few screens it comes to the understanding that it is not so. Primarily from the abundance of deadly traps, many of which are completely invisible for the first time. In General, once the person who plays CJ's Elephant Antics for the first time, this game does not go exactly, but a treacherous place remains only to remember in order to successfully bypass them later. And yet there always have to jump (that actually elephants is not very common, no one cares about) up in different kind of small platform to advance further, and to jump up there sometimes it is very difficult, and any fall here is also death... Well at least the hero has a umbrella that can fly across the gap.

The game also supports multiplayer on one computer – but he realized unusual! There will be no split screen, and the player controlling the second elephant (dressed in a yellow jumpsuit, in contrast to the "real" hero of the game, dressed in red), follows him at a distance. In this screen only shows what is visible to the first player and the second generally plays blind!!! This has not been implemented in games before or after. Yes, I'm sure many will say that such an approach kills the multiplayer in the game, but certain "top" players this option will be an incentive to study the game thoroughly, so that later, even knowing how many seconds or minutes from the start of the game is one or the other trap, really play with your eyes closed, showing a phenomenal master class.

Graphically, the game looks no masterpiece, but it is good: side view, the palette is bright, the quality of the drawing on top. Verdict – nothing unique, but still it is very interesting, sweet, almost good and a really challenging game, which any connoisseur of the old platformer will surely get a lot of pleasure.

Enjoy playing CJ’s Elephant Antics online, it can be played on your browser and is free.