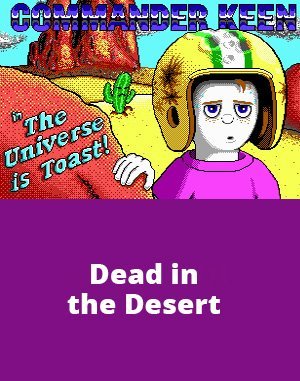 Click here to play Commander Keen 8: Dead in the Desert online
5.0 /5
The Story continues where The Keys of Krodacia left off. After falling right into Mortimer McMire's hands, Commander Keen is transported across the universe to the desert planet Calidune. Landing safely on the planet's surface, Keen meets an alien creature who believes himself to be Commander Keen. After a brief argument over their identities, Commander Keen agrees to help the imposter by searching Calidune for a power source in order to power a fake Bean-with-Bacon Megarocket off the planet. This seems to be the only way Keen can escape the planet and stop Mortimer McMire!

The story continues directly after Commander Keen 7: The Keys of Krodacia. After being transported across the universe, Commander Keen finds himself stranded on a desert planet called Calidune. Upon arrival he is greeted by a strange alien who appears to be impostering Commander Keen. After both lacking the credentials to prove who is the real Commander Keen they decide to put aside their differences and work together in order to build a bean-with-bacon rocket ship in order to save the universe from the evil clutches of Mortimer McMire!

You can play Commander Keen 8: Dead in the Desert online here, in web browser for free!