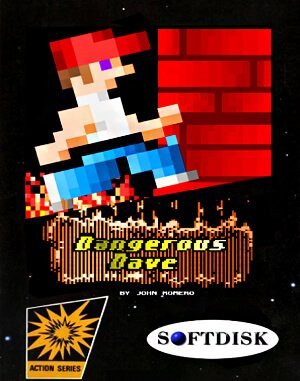 Click here to play Dangerous Dave online
4.2 /5
A side-scrolling game starring the eponymous Dave. Dave must collect trophies in each level in order to finally make it to Clyde's hideout.

Dangerous Dave is a 1988 computer platform game by John Romero. It was developed for the Apple II and MS-DOS as an example game to accompany his article about his GraBASIC, an Applesoft BASIC add-on, for the UpTime disk magazine. Play Dangerous Dave online!

The object of the game is to collect gold cups to move on to the next level. Since the original 1988 publishing of Dangerous Dave on UpTime, there have been three sequels and three ports of the original to other platforms.

Guide Dave through ten terrifying levels as he tries to reclaim his trophies from a deserted pirate’s hideout! This is a standard platform run and jump game although with only 10 levels it’s meant to be more difficult than the usual.

This game is in 16-color double-res mode on the Apple II and is essentially the same as the original Apple II hi-res version titled “Dangerous Dave in the Deserted Pirate’s Hideout“.

You can play Dangerous Dave online here, in web browser for free!

Crime Does Not Pay