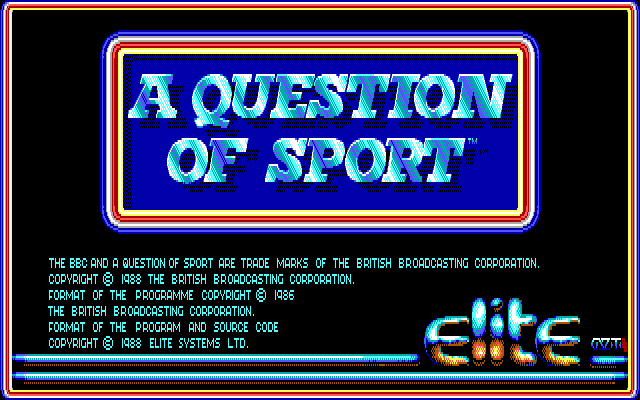 A Question of Sport

Click here to play A Question of Sport online
5 /5

The famous developer Elite Systems Ltd. created A Question of Sport in the year 1988. It’s a perfect Simulation game and can be played online by clicking here.

A Question of Sport description

Quiz game on the sports theme under license from the eponymous British TV show, appeared on the screen in 1970 and not coming with him to this day. Judging by the found description of the source, is not wholly accurate its computer incarnation, but rather "stripped-down" version with slightly simplified rules.

You can play against the AI or a living person (one computer). Before you start you have to choose one of five collections of questions (level of difficulty they seem to be no different) and "the protagonist-captain" bill or Ian, and then (along with the opponent doing the same) – your favorite sport from the list. Last a total of nine: football, Rugby, Golf (and in the same block there questions and cricket), baseball, tennis, athletics, equestrian, Boxing, Biking; but there's also "kind of" marked "?", which can hide anything, including those not included in the list above (such as "favorites" to choose not worth it). In A Question of Sport compete by two teams of three (virtual in this case) people, so that you are then required to choose a "subordinate" of the output to the screen list (if you play with the computer, we always have the right to do it first), while paying attention to his or her favorite sport. As soon as all these procedures are completed, begins the action, consisting of six rounds (in a real quiz more of them).

The first stage – the choice of questions on those or other sports, hidden under twelve numbered panels. Choose any of them – opens an icon denoting a particular sport. Each question has four possible answers, but the time to apply such, you need just a few seconds (the time limit here is hard, Yes). If answered correctly – then we get two points, if wrong the chance is given to the opponent, who in the case of a correct choice earns his team one point. In this round played out six questions from the existing twelve, and the teams answer them in order (formally the order – in terms of the players within the teams also observed).

The second stage is guessing the name of the athlete for one, two or three hints: read the text and choose from the same four answer choices. If you do not know the answer to something does not click, then get the second clue, again if the "past" - then waiting for the third and last. For the correct answer the first time given three points (unfortunately, the number of points for correct answers with other attempts, if suddenly it is different, not established); in case of error, luck can try their rival, getting the right choice one point.

The third stage is "home" and "guest" questions: for this round is very important before you start to choose for themselves (like the captain) the one sport in which you understand (if there is one), and ideally (because you are playing one of the three members of his team) to take a mate, "addicted" the same (or any other in which you too strong). In this contest each participant of the other team before the next, you are asked to choose whether the "it" sport (in this case, the correct answer will be awarded one point) or "other" (unknown what kind; this will bring two points). In case of an error by the opponents, as in previous rounds, given a chance to find the right option and earn one point. Please note that members of the team controlled by the computer, almost always answer correctly to the questions from "their" areas, but quite often choose the "not your own" - apparently in an effort to gain more points. For reference: in real jeopardy captains to questions about "their" sports reply was not allowed.

The fourth stage is the most difficult: requires by reading the statement of a fact in the biography of the athlete, the events in the course of any tournament or something else, choose one of several proposed options for further development of this story. As in previous rounds, the question text is running (with decent I have to say, the speed) of the line - but particularly here, the same applies to the text of the answers, and in the list view then displays only the corresponding Latin characters (and it is clear that the time limit for the actual choice is also saved). Otherwise, the rules are the same: two points for a correct answer; the opponent can try and earn one point if you "bite" the same question.

The fifth stage - a sort of speed competition. Consistently ask nine questions and can answer them at the same time, both teams: which will make it faster for the "fixed" result. However, to answer after losing contenders not here gives the team if played right, she gets two points, however, one point is automatically awarded to the opponents, which thus no effort for this to work is not required. So if suddenly, in this round, came across a question you don't know the answer, then you may want to skip: there is a chance that they will be able to point "just because".

Finally, the last sixth round – full analogue of the first: played the remaining six questions of the twelve hidden under the numbered panels, according to the same rules.

The game is very difficult. First, already noted time constraints: even if the answers served to you in the form of list is still to read them (and the answers) have to be very fast, so knowledge of English is required, and not the least. Second, some of the sports represented here – Rugby football, equestrian sports and especially Golf, cricket and baseball in our area, to put it mildly, have a small fame, so many players will certainly become a serious problem. Incidentally, among the issues even football (not to mention something less common) sometimes there are jobs that could put in deadlock, and the fan - if, for example, talking about the history of any English neimenityh club. Third, it is necessary to note that correct answers to the questions in the case, if both teams they were not consulted, not shown, so for the development of a collection (of the five) can only remember specific good deeds – others and their own (if they were random). Jobs in each of the blocks a lot, but quite a big chance that when you restart with the same set some of them sooner or later again. And most importantly – in any case do not forget about the release date of the game: some questions (e.g., which team won the world championship for a certain sport so many times) are directly connected with the realities of the late 1980-ies and may not correspond to the modern situation.

The graphics in quizzes, as a rule, is not estimated, but for A Question of Sport is to make an exception: first, support two modes of palettes (CGA and EGA), and secondly – there are good-looking (albeit black and white, but just "vintage") portraits of participants, which is a digitized photo. The same applies to the "presentation" of the head process, is here in his capacity as a famous sports journalist David Wain, who led this broadcast on television from 1970 to 1977.

Summary – surprisingly exciting, but objectively difficult and slightly ideologically alien. It is recommended primarily for the "battle" with a live person - if you and your buddy have good command of English language and well versed in the various stories - including "exotic" - sports.

Wish to enjoy your afternoon playing some classic videogames? Play A Question of Sport online for free here.