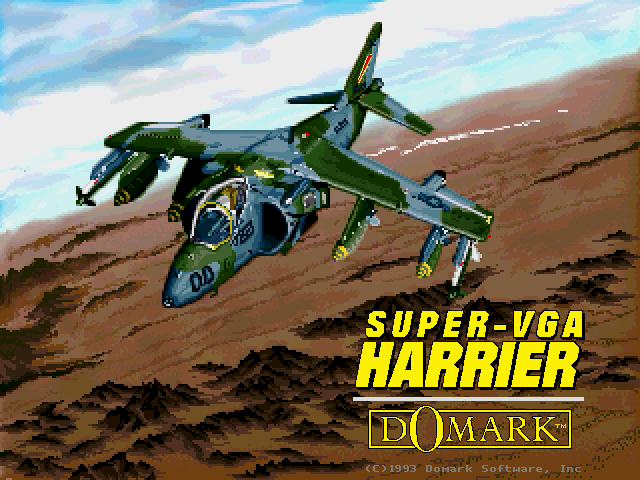 With many different features and various levels, Super-VGA Harrier released in 1993 hit the right chords right from the beginning. Play this excellent Simulation game and online now.

In fact before us now – the most superior (first on the schedule (here used SVGA-palette)) version of AV8B Harrier Assault. The action takes place in Western (not Eastern!) Timor, which we need to capture.

A large part of gameplay dedicated to, of course, control plane, however, under our command as such a very decent armed forces (planes, helicopters, ships of several types and ground troops, including special forces), and formally, nothing prevents us to play only as commander-strategist. The most interesting is a form of development of events in the game: action the enemy is always a random (although their power is about the same each time), so the replayability of the game.

Naturally, the main attention was paid to the mode of flight on a combat plane, and I must say that it has been fine, it was the first simulator in SVGA graphics and such a high resolution, the first game in the genre that surpassed the beauty of the Harrier Jump Jet. In terms of appearance there are luxury all – and the cabin, and each of the available review types and effects of explosions and lighting, and even landscape, where you can see specific trees and the huts of the natives, who can bomb and burn... And the battles themselves also varied – it is possible to attack, for example, on an enemy fleet or protect your from enemy aircraft. However, the paradox is that even though we operate mostly by plane, but the basis of a potential victory – it's still (not)successful operations of the fleet and ground troops. It should be noted that the campaign here is generally very difficult.

About the schedule has already been said above, I will only add that there is such a lot of different screens (sometimes showing that not showed in any other game) and they are drawn so well that I personally continue to believe this game is quite modern and I will consider it always. Verdict – a great military simulator, well and intelligently combines visual beauty with the complexity and thoughtfulness of the gameplay, which fans of such games is not a sin to play.

Have you ever wondered what kind of video games were played in the good old days? Try playing Super-VGA Harrier online now and we are sure you will not stop playing again.