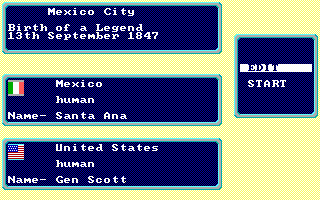 Halls of Montezuma: A Battle History of the United States Marine Corps, a top-notch Simulation game was developed by Strategic Studies Group Pty Ltd. in the year 1990. This was a very famous and in-demand DOS game. You can play it online here again.

Halls of Montezuma: A Battle History of the United States Marine Corps description

Classic wargame dedicated to some of the more major battles the military history of the United States, which participated in the marine corps. The game is not tactical strategy, namely a wargame, and therefore, it is possible to direct control of each individual soldier, that – given the nature of the game (because, as you know, the combat task of the marine corps are very different from those of the "regular" armed forces) – is an additional complicating factor.

Temporal variation of missions is quite large: they include the operations of the Mexican-American war of 1846-1848, of the First and Second world wars and the Korean war of 1950-1953. The game has a rather high realism: on the job can affect the features of the landscape, the weather, soldiers can get tired, they can end ammo... the Number of units is usually, incidentally, is quite large, but the degree of "handling" them – on the contrary, extremely small. You can only give orders to a General and obtain a response message and various reports from subordinates on the progress of the mission, but to do something after you were given specific orders no longer can.

The interface of the game in terms of complexity can be defined as "average". Units marked by a squares with letters. The symbol "X" marked Marines, in some missions there will be support in the form of armored vehicles ("O") and artillery ("S"). Using the messages menu is possible at any time to see the status of each specific unit for fatigue, morale of soldiers, the presence of losses and the supply of ammunition. Here you can see the map of the mission objectives on this map and the direction of impact of specific units.

For return of orders is a separate menu; as already mentioned, orders can be given only of a General nature. Moreover, far not the fact that your order will be executed (soldiers may not be able to execute it due to some factor [sudden attack of the enemy, the blur of the road or something]), and the most interesting – sometimes they can even break it, well, not exactly to break, but to make it a little bit differently (for example, to attack enemies from a distance, not close like you said).

The main thing in battle – earning the so-called "victory points" are awarded for achieving certain goals. The number of moves in each mission is different, but it is always limited; once they run out we counted the number of available points from sides who have more is the winner. Graphically, as already mentioned, the game is nothing special is not represented, although, of course, it is worth noting that the landscape is drawn very very good.

Verdict – the game is pretty interesting, but the impossibility of normal control – not in terms of the interface, in the implementation of orders to subordinate units and monitor their execution - is still not implemented very conveniently, and here you can play as because of the completely independent of the player chance, and just because "moves over". However, the overall impression is still largely positive, so to recommend the game to fans of the subgenre can be.

Play your favorite childhood game Halls of Montezuma: A Battle History of the United States Marine Corps online in your browser for free here.