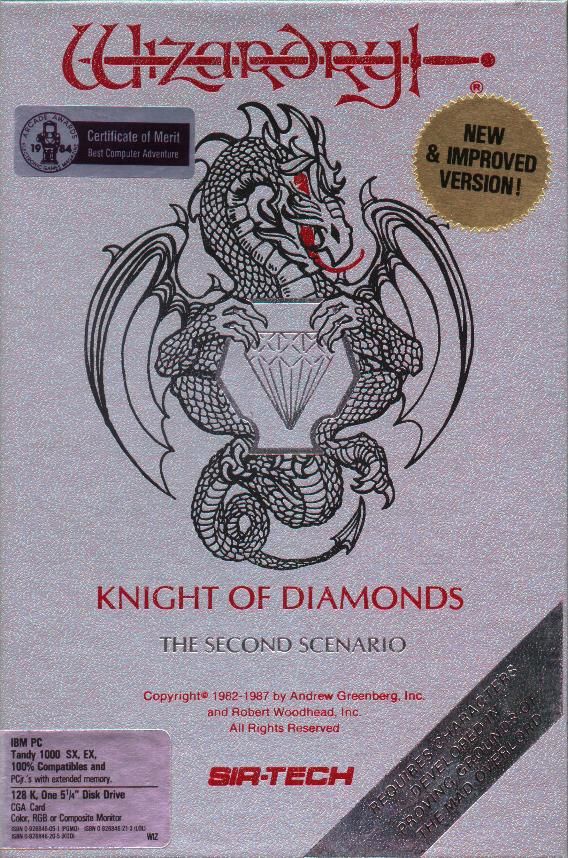 Wizardry: Knight of Diamonds - the second part of the legendary role-playing series.

The game begins shortly after the events of the Proving Grounds of the Mad Overlord - wizard Werdna (Werdna) and defeated a powerful amulet returned Crazy Lord Trebor (Trebor). As promised, a brave troop of adventurers, with the triumph of returning from the maze Vergne was in full composition included in the personal guard of Trebor. Alas, the new honorary positions, our heroes have been very long - the madness of owning an amulet and fear return Werdna brought some crazy ruler to suicide.

And the evil wizard, and the tyrant is the ruler of the dead... now, it would seem, need to get to work in the Kingdom of Llylgamyn (Llylgamyn). Unfortunately, this lull was very short - in addition to Vergne in Linguine lived another bad guy with a funny name Davalos (Davalpus), which has decided that the time Werdna dead, it was his time to enslave the world. A traitor, stormed the castle, killed almost the entire Royal family and declared himself Supreme dictator for life.

But don't worry, you don't have to fight Dealusa is already done for you. The crown Prince defeated the dictator, using the power of the legendary Staff of Gunilda (Staff of Gnilda) and booking "Diamond Knight" (Knight of Diamonds). Alas, the God of Gunilda was very annoyed by all this bickering among mortals and took the stick back, placing it deep in the depths of a well guarded six-level temple. But since the power of the Staff defended the Kingdom from the invasion of hostile aliens, someone needs to get inside the temple and return it from there - with the blessing of the God of Gunilda. As usual, that someone is you.

The only hope to return the staff to collect the pieces of the legendary mythical armor and become a Diamond Knight. Only then will your adventurers will be able to reach your goal. But beware - none of the pieces of armor will not allow you to easily.

In terms of gameplay, Knight of Diamonds was little changed compared with the first part of the series - all the same classic turn-based "dungeon crawl" where you control a squad (up to six characters), making your way down the dungeons. The choice you are given all the same set of races and classes, as in the Proving Grounds of the Mad Overlord. In the original version of the game you need to pass the first part of the series, to play the sequel - the possibilities to create a new party was not, you could only import it from the previous part. The reissues of this opportunity you have here (also you can choose a ready-made party).

The difficulty of the game greatly increased, as was originally assumed that the sequel will play enough experienced players, the last Proving Grounds of the Mad Overlord. Therefore, the party below 12-13 level will be very difficult. The game still does not forgive mistakes and requires careful attention to character development and tactical combat. However, starting with this part you can save the game in the dungeon (in the first part for this you have to come to the surface).

The result is a fascinating, complex, and truly "hardcore" RPG, which - evidently - is not less attractive than 27 years ago, when the first detachments of brave men descended into the dark labyrinth of the temple...