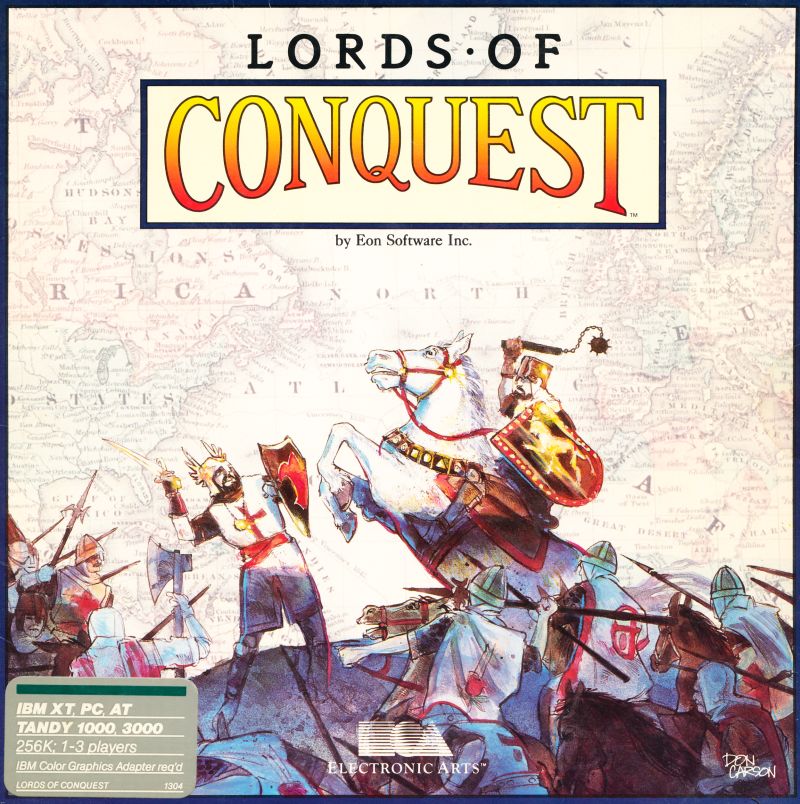 Lords of Conquest is a Strategy/Tactics game released by Eon Software, Inc. in 1987. It is an interesting DOS game and a must play for all old videogame lovers.

The global strategy is clearly "inspired" Board game Risk (although formally made by the eponymous Board game, about which, however, little is known).

Her goal is to choose a country (not necessarily existing), for which we are going to play, and conquer the various territories on the global map, "competing" in this case with the enemy (the computer or another player). There are nineteen "preset" scenarios with prepared cards (if the cards are very interesting – for example, a map of the United States or Australia, where we are playing for one of their States that are captured by others), however, it is possible to create your own map for scenario editor.

The troops of each side in three types – infantry, cavalry and Navy. The game has a strong, oddly enough, the economic component - for the production of new troops need a variety of resources (iron, gold and so on) that are only available in certain territories, therefore, such lands worth conquering in the first place. To sustain the army also requires resources ("carts") that you want to move with her (so an army with a small stock will move a short distance). A choice of four difficulty levels.

The graphics in the game, of course, very conditional, well-drawn only map (palette – CGA, so much brightness do not wait), the army identified the most conventional and schematic icons. But, unlike many series (although the game to treat them all the same is impossible), it is quite understandable and accessible to use interface. Verdict – this is an interesting turn-based strategy, which may not stand the full test of time, but which still remains relevant for all lovers of very old representatives of this subgenre.

Not sure how to pass your time, why not play our classic videogame Lords of Conquest online? And the best part, it is for free!