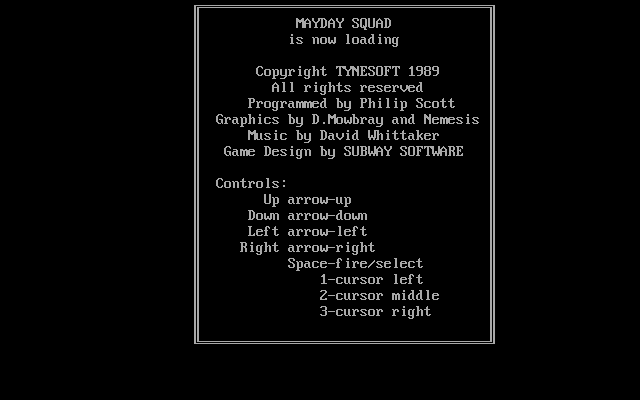 Click here to play Mayday Squad, developed by Tynesoft Computer Software in 1989. The game is a high quality Behind view perspective game with an amazing RPG elements experience.

A rare hybrid of arcade and strategy in the fight against terrorism.

The terrorist organization "the Red Legion" captures the LITHONIA Embassy in America and takes hostage the daughter letniskowe Ambassador. The terrorists ' demands are unacceptable, so the decision on storm of the building by the special forces, to direct which you have.

In your party, only three (!) person as captain (and he is the main fighter), Communicator and sapper. They have to manage. For each you can switch each can be set to a position where he should stand. The game is in first person, the gameplay is actually tactical shooter in which you will have to consistently walk the rooms and corridors of floors of the Embassy building, kill the terrorists and sometimes things blow up.

Of course, one shot won't kill us, but still it is advisable to shoot accurately. The game is time limited – the terrorists are the people warm and long pull with the murder of the girl will not. But they have held hostage all the employees of the Embassy, which is also very desirable to save and then escort you to the helicopter...

Graphics – CGA only, but for some reason in this game, no other palette can imagine (at least, until, until you see the screenshots from the Amiga version - it's again painfully sad...). Very difficult to play (which was recognized by the press even at the time of release), and sometimes irritation, but still Mayday Squad by far is fraught with a large (including tactical) potential and can seriously captivate. However, to recommend it except a very big fan of difficult games.

Enjoy playing Mayday Squad online, it can be played on your browser and is free.