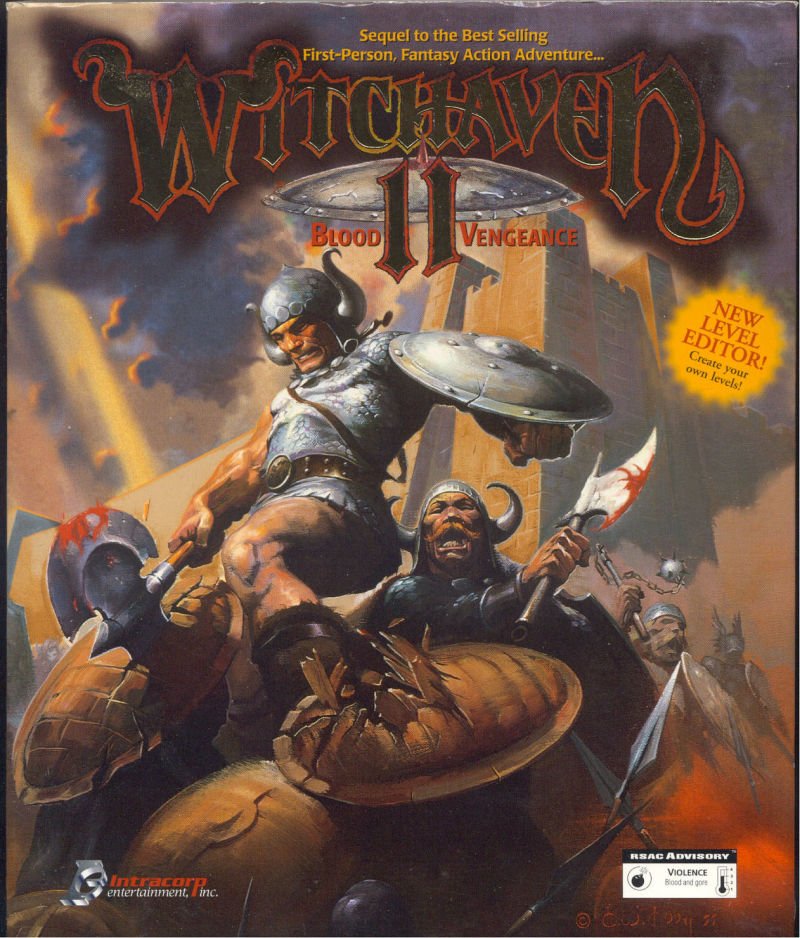 IntraCorp, Inc. developed a Shooter game in the year 1996 called Witchaven II: Blood Vengeance. You can play it online now.

The game continues the story of the first part. Everyone celebrating the valiant knight was Grandeval (Grondoval) over the wicked witch Illorin (Illwhyrin), and then the main character magically cut down...

Wake up in a strange place, he discovers Grandeval that all people, including his beloved Elizabeth (Elizabeth), had disappeared. And then there is the dragon Ikette (Ikethsti), which (Yes, the dragon girls) tells Grondahl "good news". On the showdown "pulled" sister Illorin, evil and very powerful witch Kira-Argot (Cirae-Argoth). Commanding the remnants of the hordes of monsters, which served as her sister's and private soldiers of the clans of Argetnina, she prepares to perform the great sacrifice, as victims of people have Grandval and his lover!

Of course, our valiant knight rushes to rescue people and destroy the witch...
I remember when I wrote the review for the first part of the game, it mentioned that it is controversial. So, in my humble opinion, the second part was a bit more ambiguous.

On the one hand, the developers did a better job of level design. If in the first part the levels were somewhat bland, and boring in terms of design, the second the situation has changed for the better. In the end, visually, the surrounding space began to look more interesting – the developers have added colors and brightness, adding new locations, various small parts (all pews, stained glass Windows, lamps). More missions was held on "fresh air". The player at times come across all sorts of interesting places like cemeteries, chapels, churches.

Plus the levels have become more logical and easier to remember. In General, almost disappeared labyrinth zamorochinsky of the first part – now keys, doors, and other important for passing objects though hidden quite firmly but not so hard as in the first part - with its false walls, recesses and other hard to find places. Accordingly, the Automap now caches not showing. However, at the end of the game there are two or three fairly intricate level of the maze, but if you have magic scrolls to open doors to get out of them is quite simple.

There is one funny moment – developers, it looks like they invented breakable stained-glass Windows that they are constantly disconnects, switches or hidden exits to levels. So if you see a stained glass window, slay without hesitation... in addition, have virtually disappeared traps and jumping puzzles, and in a couple of cases when such a disaster happens, there's always a scroll nearby flight. In General, carried out by the developers working on the level design and the build I liked.

But the fact that they did not fix the slowness and the "ping" of the hero, of course, is not good. Personally, I sat through the game immediately after the first part, is still "habit" to move the valiant knight. But if you start playing from scratch... problems with addiction, of course, will be.

But the main thing - not even that: the main problem is that the developers overdid it "with the slope" enemies. If the first part of our opponents were mostly all sorts of goblins, trolls and other fantasy style beasts, here the main opponents are just people. Clad in armor, I personally reminded the armor of the Roman gladiators, fighters attack our knight large crowds, trying to hurry to send him to the light. In addition to melee, the developers have introduced the warriors with ranged attacks – throwing axes (axes stuck in walls, and you can pick them up yourself) and archers.

And here emerges a serious problem of the game – if in the previous section after the first two or three levels it was possible even on the maximum complexity to put enemies packs, whooping breaking into their ranks, then such a focus will not pass... the enemies are VERY strong armor, and each of them to put out quite a long time. Plus respawn in the game is much more nimble than its predecessor. In the end, personally I passed spidermom, and at the end of each level in the statistics of the passage, usually sported a measly one dead enemies (for example, 2 of the 70 killed). Were levels where never killed no enemy!

And this is a rich and diverse Arsenal of weapons. Arsenal, incidentally, has not changed in comparison with the first part, except that the onions added a remote weapon is throwing axes. And so - all the same right dagger, swords, morning star, halberd. And the magic has not been canceled - freeze, fireball and other spells from the first part in place, including a miniature nuclear explosion...

Yet there was a curious feature – some levels are special magical wells, logging in to that could charge your weapon with magic that increases his power and attack a few changes. So, the sword begins to freeze the enemy, the result of which he shatters to pieces, as enemies of the Duke, and throwing axe it is divided into three pieces.
By the way, about freezing – do not freeze final boss, otherwise, shattered to pieces, she won't leave printing to complete the level.
Actually, about the boss. Again he is in the game only one witch Kira-Argot, pretty weak but good-looking lady, dressed in Egyptian style.
And, by the way, will the final movie after its defeat, it's something.

In General, the game is interesting, but... specific. It is quite possible to enjoy a couple of evening, but also did not feel "special" gameplay and quit playing after 5-10 minutes. Personally, I would still advise to take a look.

Alternative description - Aleosha:
Such a solid sequel. Fifteen levels, how many new monsters, two times more weapons (on each of the weapons you can cast a spell, the flails begin to spit fire, and the two-handed sword to beat the enemies with lightning), a new shield and a significant increase in complexity.