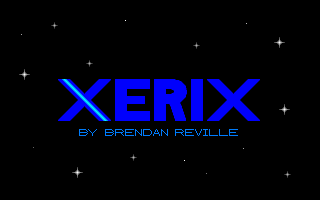 In the year 1992, Xerix was launched by Brendan Revill, a top-notch Action game with an amazing and engaging Arcade gameplay. Click here to play it online.

Interesting letalka from the top view. The plot – flies to the Earth a giant alien spaceship with clearly bad intentions, and the Terrans come up with an original plan, sending a small spaceship to meet him, which must get inside this ship and destroy it from the inside; the plan was given the name "Xerix" - The eXtended Enemy Response and Infiltration eXperiment.

Actually, it is all about gameplay – you will need to fly through the corridors of the ship (scroll the screen – horizontal) and fight with strange objects, resembling the white blood cells, not the simplest. Especially outstanding graphics can not be named (the background is a blue cell field, but some objects on it), but in General, it still looks very nice. The game in the first place, of course, interesting is his idea and level design (which, unfortunately, there are only two, albeit large), so you can look at.