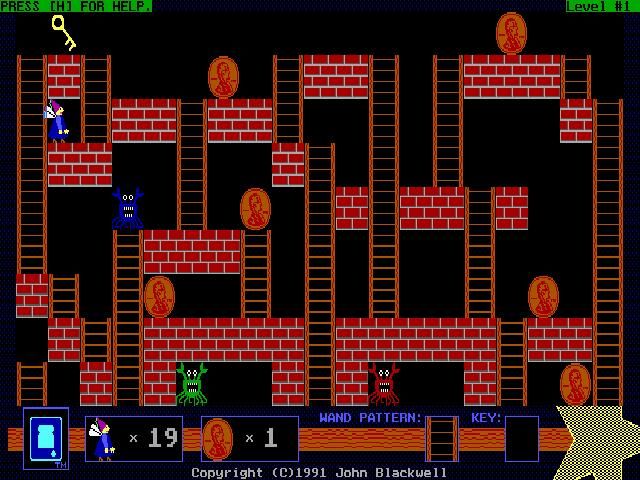 Great news for all the old video game lovers, now you can play the best Action game, F. Godmom launched by Soggybread Software in the year 1991 again. Play it online now.

Another rare instance: virtually unknown platformer (side-view, of course) with elements of strategy ("F." in the name means "Fairy"), which you need to play for a fairy, the only not captured by the monsters. Now her task is to free his friends, consistently passing levels in the form of a maze of stairs and walls.

Naturally, the levels are inhabited by enemies – those same monsters (I must say, they look quite funny). Directly to fight them fairy can not. She – and this is the main feature of the gameplay here – just a magic wand with which she can convert some objects in the level to another: for example, to make a wall staircase, as the staircase – wall. Thus, you need to clearly think your way through the maze rising gradually higher and higher.

Graphically, the game looks average, i.e. good. Backgrounds of the levels really is not, but the heroine, creatures and objects are drawn accurately. The main advantage of the game – its a really high difficulty and need fast and at the same is true for the entire level to make decisions. So – another gift for all fans of rare, very difficult and unusual.

Enjoy playing F. Godmom online, it can be played on your browser and is free.