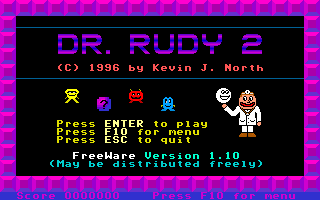 In 1996, a DOS game was released by Kevin Jay North. The game was called Dr. Rudy 2 and belongs to Action genre. Play it online by clicking here.

The first part of Dr. Rudy was a kind of Tetris in which you had to connect the colored pills with the relevant viruses, in order to eliminate them. But the second part offers us something fundamentally different.

As it turned out, the first Dr. Rudy, we were not able to completely eliminate the infection. But do not despair: we now have a special device called “quadratron” with which we should be able to find and destroy the remaining viruses. Quadratron generates a ball that changes color upon contact with the special points, and then will be able to destroy the viruses of the corresponding color. One problem - the other microorganisms were able to destroy it, which, of course, is to avoid - to get extra lives (originally two of them) have to gain quite a large amount of points.

The vaccine does continuous vertical jumping, the player can control only horizontal movement, similar to how it works in a BreakOut, but without the racket. All in the game fifty locations on five levels of difficulty, that is, ten each. And if the first one passes easily and naturally, then with a second can cause problems - what can we say about the remaining three...

In General, Dr. Rudy 2 is a real find for fans of dynamic puzzles. A large number and, most importantly, the difficulty level will challenge not only your dexterity but also wit. Therefore go for it.

Have you ever wondered what kind of video games were played in the good old days? Try playing Dr. Rudy 2 online now and we are sure you will not stop playing again.