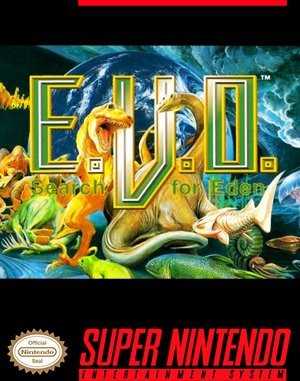 Click here to play E.V.O.: Search for Eden online
3.9 /5
A platformer with RPG elements for the SNES, developed by Almanic and published by Enix. The player controls an ever-evolving lifeform struggling to survive.

The storyline of E.V.O.: Search for Eden follows the same patterns as modern Evolution theories. The players first controls a prehistoric sea organism, and fights to gain evolution points with which he can improve his fish’s body parts and upgrade his attack/defense abilities. The gameplay is not completely linear, which means that certain choices of paths and stages will affect the player’s success. Play E.V.O.: Search for Eden online!

The game is composed of a series of stages, in which the sea organism slowly evolves into an amphibian, and later a land-only creature. The physical changes are fairly scientifically accurate which gives the game a semi-educational purpose as well.

E.V.O.: Search for Eden is based on the Japan-only computer game 46 Okunen Monogatari: The Shinkaron. While the basic premise of the game is the same, there are significant changes in gameplay and the layout of the game world.

In the computer release, the battles against other creatures were turn-based; here, the combat is real time, which effectively turns this version into an action RPG. The stages, while retaining similar themes, have a completely different layout. Side-scrolling view prevails over the original’s top-down perspective. There are also boss battles that were absent in the original version.

Character building (“evolution”) is also different. Instead of distributing evolution points into four parameters, the player now basically “buys” upgrades, which have a fixed “price”. The player is able to acquire such upgrades for the creature’s body parts (jaws, neck, body, etc.), raising their parameters and becoming stronger.

Story elements, friendly characters (NPCs), and quest-based structure that characterized the original game have been reduced and/or omitted in this release.