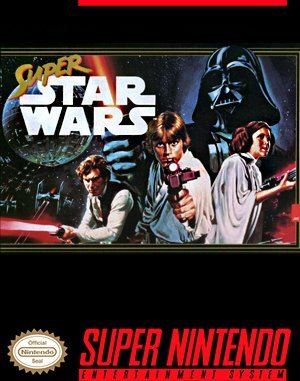 Click here to play Super Star Wars online
5.0 /5
Based on the original 1977 Star Wars film, Super Star Wars is an arcade-style side-scrolling platformer chronicling Luke Skywalker's journey from the deserts of Tatooine to the massive Imperial superweapon known as the Death Star.

The story of this game is based on Episode IV: A New Hope, the first of the original Star Wars movie trilogy. Play Super Star Wars online!

The player initially controls the movie’s main hero, Luke Skywalker, but two more controllable characters join later: the careless captain Han Solo and his Wookie side-kick, Chewbacca. The game generally follows the movie plot, allowing the player to experience some of the most important sequences, such as the search for Obi-Wan Kenobi, rescuing princess Leia, and the final confrontation against Death Star and its TIE Fighters, led by the mysterious Darth Vader.

Most of the game levels follow traditional platform gameplay style. As Luke, Han, or Chewbacca, the player makes his way through the linear levels, fighting enemies, jumping over obstacles, and collecting power-ups. The power-ups include standard health-restoring items, upgrades for the blaster gun (up to five different upgrade levels), as well as special items that can be used for massive destruction of the enemies. Luke uses a weak blaster gun, but later gains access to a lightsaber, being able to fight enemies melee-style. Han and Chewbacca use stronger flame guns, but cannot upgrade to better weapons.

Some of the levels are dedicated to familiar Star Wars vehicles (such as a land speeder). Controlling the vehicle from a third-person view, the player has to navigate it through the pseudo-3D environments, avoiding obstacles and shooting at enemies on the way.

The PlayStation ports of the SNES version have updated controller and display options, leaderboards, new save options, and Trophies.