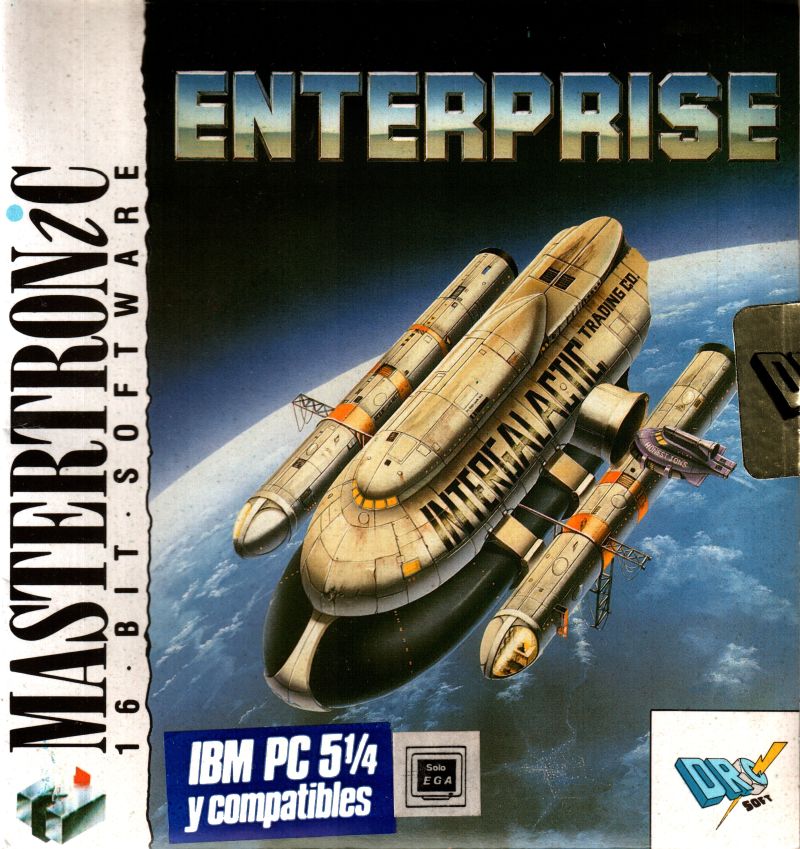 A DOS game was developed by Melbourne House Software, Inc. and then released by Industrial Concepts & Design in 1989, the game was called Enterprise. Now you can relive the memories by playing it online here.

To begin this brief description I would like with a good old warning: "don't be fooled". Yes, we have another rarity of the n-th order, on the PC version which has no single mention in the Internet, and this time - like not some primitive arcade game in a strange language, and the real miracle: multi-genre space simulation game which can be put almost on a par with the legendary "Elite". But actually this is not so. Yes, the wild are rare. Yeah, kind of multi-genre. And Yes, its ambitious and interesting. But not so remarkable as it might seem at first.

Actually, to play for nameless (the name, however, can be entered before the start of the action) of a businessman who stole a small spaceship and are now forced to hide from the police in a huge galaxy, and along the way - to survive, industrial minerals trade with the same-looking aliens (and both should be found), in order to be able to refuel and repair his vessel, and, oddly enough, to eat by yourself. The user guide promises us some absolutely incredible number of planets available to visit, and at the same time formulates, though not quite clearly, the ultimate goal: earn enough money (note that this amount is subject to inflation!), to settle on a "Paradise planet", spending the rest of his life in luxury and peace. Meanwhile, the reality may end very badly: while the player is making futile attempts to deal with management, after just a few minutes - and the screen lights up with "solemn" report of the untimely demise of the protagonist due to the consumption of fuel (even despite the fact that you will not move)...

In General, the use of the above guidance is not enough: of course, we won't think of perverted ornate language about how to do it, but at least a little to Supplement the information available there is crucial. So, the first thing to do after loading the game, is to choose the navigation keys (even if in fact they immediately set to "cursor arrows"), and "Fire" (for example, it would be "Control"). After the start of the performance required to press the "M" that will allow you to see the map of the sector with planets. Move the pointer back and forth from buttons to motion, and select vending world through "Control". Not work? Alas, not every "ball" live (see the first paragraph of the description). But if you are lucky, then your eyes appear some of the stats on the celestial body, which should be studied carefully: in particular, there will be information about the type of the minerals, the level of economic development of the local civilization, honesty inhabited there race (!) and so on; then press "Control", in order to return to the map screen.

Once below her image - in the running line - appears that the computed coordinates for giperpryzhka, use "H" (more on this in the manual is not written) and you'll be relatively close to the desired planet. Next ( which is also not written...) should apply a combination of buttons, namely the "next" arrow (for example) and "Control", in order to finally fly in the direction of the desired object. Entry into the atmosphere, accompanied by the shutdown of all ship's systems except the engines, is automatically; to land (but the final - that is when we already see before us, say, "landscape") you have to press "L" to engage in conversation with local inhabitants - "E" (this will lead to shutting down the engines), and to activate the motors that will stop the conversation - again "Control": the last step will give us control of the ship. If we wish to fly, not just mentioned letting go of the button, use the "cursor arrows" at the right time, having already risen in the planetary heavens, press "L" - approximately so. In fact, keys as documented, so might not be here quite yet. For example, "B" is responsible for the acceleration (not the same hyperjump), "S" for the shield power of the ship, or "D" for opening (or closing) a door of the cargo compartment, and so on. By the way, it should be noted that there is a risk not to land on the planet, even entering in its atmosphere, and similar is fraught with hit in hyperspace with no way to stop, that is, with the sad consequences.

Dialogues with representatives of extraterrestrial civilizations is one of the main and most difficult parts of the whole game if not the hardest. However, it would be logical to expect that it will be exciting - but again see the first paragraph. First, I may say, "the dictionary parsername input" nowhere close and not described, so the phrase (in English) will have to come up with their own. Second, the goal of most conversations is the purchase or sale of minerals, which in the Enterprise is designated the letter codes (see guide where there are examples containing this information replica). Thirdly, the aliens love to chat and have a very solid vocabulary, as well as outstanding (or seemingly so) talent for understanding our scribbling, but "customize" the conversation we need a "wave" is very problematic. Sometimes, it seems that green skinned freak and is bullied: a series of questions, "How are you?" "I think it's normal?" and "can you prove it?", alas, it is not something unusual, while we need only some goods and services, rather than speculation about the meaning of life... And Yes, it really is possible, as shown in the only available on the world wide web video for this game (not filmed on the PC version, of course), to cuss out the alien, causing serious personal insult and repulsed any desire to deal with you. But to do such is likely to be perhaps that very thin esthete, lover. To give came into contact with the substance of the word, after his rants, press Enter.

The second big problem is the aforementioned need to keep his condition in all senses (to track need to use the key "R"), which will have to keep in mind a lot of information. At launch you have some starting capital, there are fuel and food begin to consume immediately (some of the parameters can be viewed by pressing "I"), but no single resource for sales (by the way, just mentioned screen lists all of them, so each time to climb for these data in the guide is not required). And yet, craft a set of systems and components (some of which were noted above), tend to break down from any emergency situations such as collision with an asteroid, for example, or just. And if, say, the damage of the power shield is nothing wrong from time to time happens, that's the fault of the food compartment will lead to rapid deterioration critical to the survival of products. Fortunately, on the inhabited planets and you can buy food, fuel, and repair the ship, and even arrange several types of insurances (press "C"), - but, of course, all this is not free. And the prices are different everywhere (and they depend on many factors), and some of the sides can the most insolent manner to deceive you. And finally - galactic police. No, she's deliberately not looking for you (which is odd given the backstory, but maybe not, because you are too small fry...) and the default is peaceful, but in space there are other ships besides yours, some of them may be around when the protagonist applies the acceleration or technology giperpryzhka; the first damages the lining of "neighbors", and the second simply kills them; both lead to detention of the criminal (that is you) and issuing a large fine, but technically does not affect the ability to continue the game, if you have something to pay. And most importantly, fighting - and in General any action of the elements here. Exactly. For some it's a minus, for someone on the contrary.

The question is: how it looks? I must say, very good. Nice algamarca eye EGA-palette, technically not too rich in objects (which, however, understandable site of action), but with an epic (and varied) giant "structures" in the black space and the cutest (besides having a true facial expressions!) portraits of humanoids. However, exactly how the game is Enterprise, not too interesting: her main weaknesses is a terrible monotony, the slowness and lack of clarity about the ultimate goal. So as it is unknown what rarity you can (and should) quarrel with the aliens at will, but sticking around for long is unlikely. Elite, anyway, in better times.

Want to play Enterprise online now, play it on your browser here.