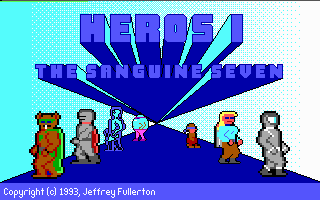 Safari Software Ltd. released a DOS game named Heroes: The Sanguine Seven in the year 1993. If you are interested in playing this Arcade online, then click here.

Rare shareware platformer, where some of the superheroes a very original kind are the gang Wild Hare (consisting of people, by the way). Clarification in the story are missing, but this is the best. However, one small clarification needs to be done. This game – rare full, NOT shareware version of this game, where was available only three characters – a girl, an anthropomorphic squirrel and turquoise ball-shaped creature that looks like a gorilla (that the full version will tell you in the beginning of the game, by the way). So here is the opportunity to play for each of the seven heroes promised in the name of the game: in addition to the already described, there are dwarf ninja, someone like a greenish skeleton and two different humanoid robot, one of which suspiciously looks like Robocop.

A total of fifty levels to play, you can choose any one of the seven heroes. What is nice – ability (and both the strengths and weaknesses of) each of them is different and, therefore, the passage will be at least a little different (for example, the protein may be across the building or to enter it, and the gorilla climb the walls of this building). The game has two main types of bonuses: the crystals allow you to increase certain stats of the character, and fruit to restore health.

But the most unusual is the fact that exciting action in this game takes place in classical music performed by four of the greatest composers: Mozart, Bach, Beethoven and Chopin!!!

Graphically, the game may not seem too primitive, because the backgrounds here are not particularly varied and beautiful, but the characters for this game, drawn in a surprisingly well. However, the graphics – not the most important thing: due to the presence of three really different characters, the game can be considered as a very interesting platform and to take a worthy place in the collection algamarca rarities.

Do you want to relive your memories and play Heroes: The Sanguine Seven online in your browser? Play it now for free.