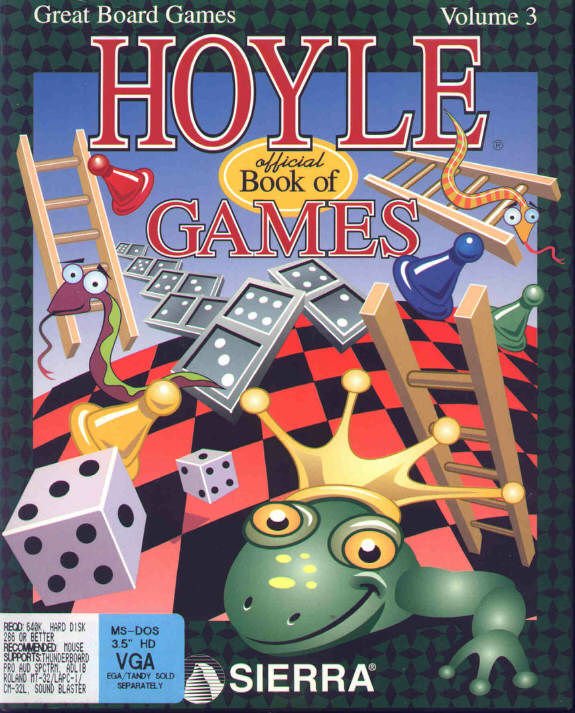 The third part of the famous series from Sierra, this time dedicated not card, but actually Board games, with both requiring the playing field, and without it.

A total of six games: dominoes, checkers, "backgammon", Yahtzee and not too popular, but known to educated people of the Indian intellectual fun parcheesi and Lila (Yes, in India came up with not only chess); the rules of each of the games can be found inside the game itself. If you don't count differences in the formal theme, this part is extremely similar to the first: all games require the presence of opponents; those opponents (artificial intelligence) - again in the tradition of Hoyle 1 - divided into two groups according to the level of his skill, but now almost all of them are characters any "Serovsky" games when you select them as opponents, even "blatantly" advertise "their" games. However, there is a crucial difference from the mentioned part five of six games (with the exception of Domino) you can play not only against computer, but against a living person for the same car.

Graphics and sound has improved significantly compared to the first game of the series (to compare what it that second, excuse, it hardly makes sense at all), although animation is still small and it concerns all the same changing facial expressions of opponents, if you play against the AI. But added music in the main menu (but only in it). Overall - pleasant, varied, and interesting thing: in fact, another way to play Lila on the computer?..

Have you ever wondered what kind of video games were played in the good old days? Try playing Hoyle Official Book of Games – Volume 3 online now and we are sure you will not stop playing again.