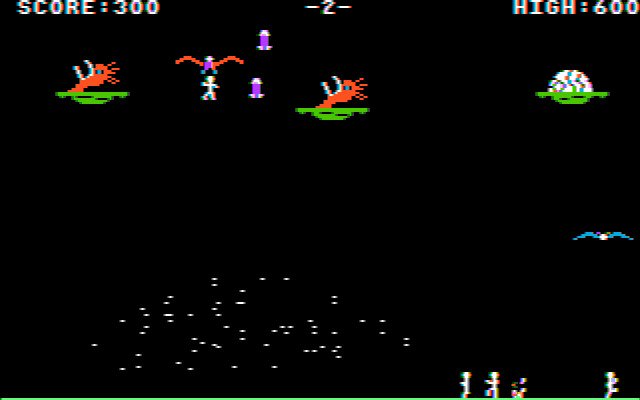 In 1983 Sirius Software released Buzzard Bait. The game was an instant hit among all and played for years. Play it again online now.

It is difficult to imagine when people started to be afraid of birds. Maybe even during the early middle Ages (we all remember from childhood huge bird movement, feeding elephants), maybe after the eponymous film by Alfred Hitchcock. Maybe you're not afraid of birds?.. Well, it's safe to say acquainted with this game, don't be surprised if common urban birds like the Sparrow or the pigeon, cause you is not too pleasant associations.

No less difficult to guess what could induce people to create similar games. Of course, they probably watched the said movie, and maybe even used some "standard" way to raise the imagination (read: "how much dope you had to smoke, to come up with"). However, hardly that simple. To create such a game could only incredibly talented people, though endowed with so much talent, which very closely borders on insanity. Sensitive people and small children in General, please do not worry, and even do not come close to Buzzard Bait – the nerves will be stronger, and in all senses.

The history of the game there. More precisely, it is unknown. We have no reliable information about what could happen in our distressful world, that has led to such terrible consequences. Maybe this is not our world... But the fact remains that the birds attack people, by the people to the birds now – the food. Moreover, these birds are not crows, not eagles and even condors, it's a huge, terrifying winged mutants with some signs of anthropomorphism. However, do birds eat people rarely, mostly fed fresh and flutter in sharp claws meat their newborn Chicks... it would Seem that humanity is doomed. But no – there's still hope: a powerful mobile cannon-a robot whose task is to protect the remaining humans from the feathered monsters. And to manage that gun you have.

At the time (only time!) remember that this is a just a computer game, and move on to the description of how it looks in practice.

At the top of the screen are three platforms. This – birds ' nests-eater. In each nest lives a couple, the future "mother" and "dad". In the beginning of the level "mom" lays an egg from which the chick will hatch only a few seconds. This is important.
At the bottom of the screen on a horizontal surface is chaotically rushing around unhappy people. On the same plane in the first seconds of the level you receive our supergun. Guns have only four choices: left, right, jump and shoot. Our goal is to save as many people as possible and destroy all the birds. But this is just the tip of the iceberg.

First bird some time just hovering above the ground. Then, seizing the moment, attack the people. The man grabbed the bird did not immediately carry him to the nest – until then some time will still fly with him near the surface. If you can get into it at this point, the person can still be saved (he falls to the ground and continue in panic to run around with other dogs). But if you can't save him, the bird will carry prey to the nest, where the newly hatched chick (depicted as a giant head, a lot more mother or father) will eat (it will show you all the details). The worst thing is that after a certain time, or rather after eating a certain number of people, the chick will grow up and be able to leave the nest, joining the hunt with their parents. One of the main your task – in any case not to allow it. The level is passed if all six birds were killed, none of the Chicks have not corroded to the ability to fly, and at least one person alive.

We should not think that the birds will not resist you. First, they throw in some purple balls. When hit they do not kill immediately, but still fall under such a bombardment should not be. But if you (usually jump) accidentally comes in contact with the bird, then you will be instant death. This is perhaps the main difficulty of the game. For the first time, you have only three attempts at completing the level.

But birds of prey is not only your enemies. There is still nicoletiidae "fat" birds, which are green and white (appearing from the second level). These birds do not prey on people, but only harm one. And if a white "fat" still can be killed like a shot, and "zaprygivayem" on it, that green is killing when you touch exactly the same as a bird of prey. Fly "fatties", as was said, very low to the ground and in a straight line, their presence is an additional complication for the passage of the (subsequently to their level will increase).

The ability to jump is important in the game. First, the jump is sometimes possible to trick a predator, which already aimed at a specific person - an impression that they are still a little afraid of you, because usually in this case, slightly change the flight path. Secondly, the higher we jump (and you can jump pretty high), the more chances for the speedy passage: we can kill the bird when it is still near the nest and took off on the hunt, might try to save the man, under whose feet is looming death in the form of a giant beak, lastly (but rarely) may even destroy the nest or kill Chicks/destroy the egg. But you have to jump carefully: birds love to "fall" down sweep "zigzag", so the probability of a collision during the jump increases. And this, as already mentioned, instant death.

Very often, after the successful completion of the level you are waited by bonus levels in zero gravity. This is actually a separate game. Your task is to "earn" his right to an additional life, that is, that in case of death of even a third cannon from the ground could grow one, it's definitely the last hope for the mad from the horror of the unfortunate people. And for this the gun need... to collect! In practice, it looks like. Your gun is floating in zero gravity and retains the ability to jump (and jumping in zero gravity are phenomenal). Flying around a crowd of blue fat birds. They are absolutely safe, but in contact throw you somewhere else. Among these birds along the horizontal trajectories swim back and forth three items that comprise your gun. Your task – to collect at least two of them (for some reason sometimes this is enough, sometimes it is necessary to collect all three). Thus, formally, fat birds get in the way, but in theory may help – it is possible that the result of the next push you'll be precisely "on" the necessary details. However, there is a danger: in between flocks of birds float also booby-trapped, and that facing them is already certain death.

The game was released in 1983. But this chart does not tell you. This chart at least 1986! Amazing detail of the animation literally attracts the eye. Here the bird laid an egg. Here it is covered with cracks. Here it appears from a giant hungry bird face, in which a helicopter mom (or dad) throws a squirming little human body that chick almost instantly swallows. And sometimes (rarely, but it happened once) the birds begin to "carve" the man in the nest live! Not the most pleasant sight, of course. But still, the schedule can not praise for 1983 this is a truly remarkable achievement.

But the graphics are not the most important thing. And not sound (Yes, the game is still voiced!). And the atmosphere. Unique, non-transferable, are not comparable in a literal sense with what the atmosphere is, of course, largely shape the aforementioned graphics and sound, but not only. The game is scary to play, and no Shader monsters don't compare. Here after all the modern "horror" seems just a child's play.

The fear builds. It is formed somewhere in the lower depths of the subconscious, swirls, rolled rings, and then spreading across the body like a snake slippery and sticky, penetrating to the remotest corners of the mind... of Course that's an exaggeration – it's still just a game, but the feeling of her even I was very strong. After a few minutes of the game I had a clear and solid goal – to prevent the death of any one person on the level. Do not give damned feathered cannibals to eat the meat of intelligent beings! Man, only man will rule the land, and not this here shaggy misunderstanding with the brain the size of a pea and an insatiable belly! Come on, bitch, come out to fight: – your race against mine. But you have no chance. Your time on earth has expired, and all that awaits you is death from my missiles. Similar thoughts arose in my mind when passing those levels, which was really hard...

Finding Buzzard Bait (look the world wide Web and are surprised by the lack of ANY information about the game!) now – this event is truly historic proportions, is the greatest, indescribable joy for all oldhamers. This is another rare example of a case when a real brilliant masterpiece managed to find and retrieve the deepest pit of ruthless Years. Since the inception of the game it's 26 years. She was never that popular, but even any known. But even now she grasps the head, entirely. This game really wants to play, she does not let go, indulge, despite the terrible and frightening scenes of shadani. This is truly a masterpiece, a masterpiece for all time, relevant in any age whatever. It is impossible to give specific recommendations: the game is recommended for just EVERYONE. And ten points out of ten is nothing more than a pale Ghost of the evaluation, which this game deserves, really.

...Birds have already laid eggs. Watchful eyes of a predator chooses a victim among the shifty little men. But the hand already on the remote, and vengeance is ready. This day will be the last for one of us, a bird, and something tells me that it is you...

Not sure how to pass your time, why not play our classic videogame Buzzard Bait online? And the best part, it is for free!