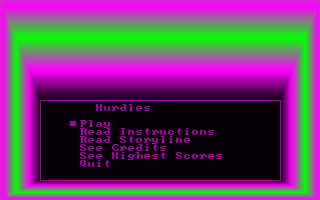 Hurdles, a DOS game was released by the very talented group Roland Ludlam in 1994. Little did they know that they will end up making history. Play this game again here.

Quite interesting in concept letalka with a side view shareware origin. The first thing that makes you smile - menu: it has a point "View history" (i.e. the plot), but when clicking on it you openly write that there is no plot here.

The game is unusual in the first place so that at least we control futuristic space ship, but generally deprived of the opportunity to shoot; accordingly, there are no enemies, but all sorts of obstacles exist, and they can only fly around. This, in fact, the game and is dedicated to: boat under your leadership have to overcome level by level, decorated in various styles and progressively more challenging, trying not to collide with obstacles (collision leads to immediate death) and not forgetting to collect bonuses in the form of numbers to increase your score; collect the bonuses as positive numbers, while some numbers are negative, the capture of which will lower the expense - they are also advisable to avoid.

Since the game is entirely two-dimensional, and moving forward the boat yourself, we can only move it up or down (paradoxically responsible for this button left and right arrow...). On the first level, where the action takes place in the hallway, and obstacles are a series of objects like the gravestones, the game may seem simple, but in reality it is not so: in the subsequent levels, in space with asteroids and a cave with stalactites and stalagmites, will be much harder (the next level is available only in registered version).

Graphics looks a bit makeshift: bright, but not too clear; this is partly offset by a real variety of levels and complication soon after the start of the action, resulting in the picture quality stop paying attention. Overall - not the worst and in addition, quite a rare thing, interesting primarily as evidence that "non-combat" flying still exist.

Tired of your same old routine, want to add some entertainment and fun element in hour life? Play one of the best videogame Hurdles online now and change your boring oold routine for good.

I, Damiano – Wizard of Partestrada