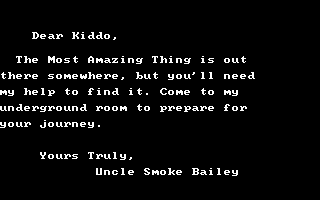 A 1st-person perspective game called In Search of the Most Amazing Thing was released by Spinnaker Software Corporation in the year 1983. Play it online now.

In Search of the Most Amazing Thing description

What lies behind the tantalizing phrase "the real adventure"? To answer this question is not easy, though, because most of these "adventures" we long ago familiar. One in ten (or maybe thirty, but the essence has not changed) is quite predictable entourage (fantasy Kingdom, a space colony, and so on), one of about five versions of the story (save the Princess, find the ancient artifact, kill the main demon), one of about seven types of the main character (Prince charming, brutal, rude, young magician, a funny loser, and so on).

But there are times when the usual standards are broken, however, there are few who notice. Remember the children's tale, "go there, do not know where, bring it, don't know what"? How about to participate in such finding (even if true only in relation to "not know"), but also in a very unusual world and unusual role?

The world ISotMAT – continuous abstraction. About it really know nothing. Apparently, it's still not Earth, though the people (the people there?) there is (but, of course, only "including"). You are the nephew of the old Explorer named Smoke Bailey, who brought to life the dream of generations – I found the Most Amazing Thing (The Most Amazing Thing), which embodies the Mystery of the Universe, but unfortunately, I lost her in the worst possible places – the Swamp (Mire). Now he wants you to give it to him. All he will give you at the beginning of the game in your home is the coordinates of the Swamp, B-Liner (described below) and items.

Do you think that these "objects" - ready inventory, which will help us in our adventure? Alas. This world is very different from all that we have ever seen, and the moral standards of its inhabitants too. Data you items is, if anything, your "product", which you will have to sell at auction (!), so, having sold them and received money, then buy what will fit for his journey.

The auction is in a town called Metallica City. "The city" this is not so great and includes (important locations) Store (store) and the actual auction. First we buy the goods, the second sell. But we should not think that to survive this (trafficking) will have only once.

The swamp is a place though, and scary and dangerous, but not "deserted." There are a lot of enemies, but many adequately minded beings, ready at least to dialogue. The dialogs for the game 1983 – it's good, whatever they were. With their help you can sometimes avoid conflict, but still possible and necessary, first, to produce (buying, selling, exchanging) need different things, and secondly- in one way or another to know something about the Most Amazing Things. Because we don't know what it is... And nobody knows... Or do we only think so...

Your journey through the Swamp occurs on carefully this uncle B-Liner'e – a very unusual aircraft, like a metal balloon. It will explore these lands. You can move pretty quickly (though the size of the game world has a positive large), your main enemies – Crabs of the Swamp. Immediate evacuation B-Liner'and is carried out by jumping out of it (or if you like, "landing") with "jet packs". Most of the playing time, by the way, will be busy just flying and very complicated (for a variety of reasons) the NAV of your amazing flying ship in the vastness of the Swamp.

Of course, that's not all: we'll have to land on "jet-pack" (which also happens not automatically, and may even end badly), and wander through the Swamp, finding yourself in literally EVERYTHING, because EVERYTHING is for something you need: found food and fuel (there are fuel, Yes) – useful to themselves, found something seemingly useless can be sold, found a creature can engage in dialogue and something to buy/sell/learn moreover, the information is also not always free and often far more important than material things. And yet, "jet-pack" is one particular property that you find yourself...

The graphics are unique so there is no more graphics in any game, and this is NO exaggeration. So much to say about it still will not work. Yes, many times conditional, but still, there are quite a few beautiful types of jumps with the "jet packs", a landing B-Liner'and in the city, the room of your uncle's with him, and even paintings on the walls (!), and even those places in the city where you can go (same Store, for example), are available for viewing from the first person. Of course, the colors here are extremely small, and the pieces and everything appearance not only and not so much the minimum, but as something unusual and very strongly reminiscent of surrealism and cubism, which mixed to obtain a completely incredible style.

No time limit in the game, more gameplay can be called almost "free". Area for research for 1983 game really huge, no strict storyline not – we're on our own in our quest. But the most important thing, and it certainly will be the final chord of our narrative, that the replay value here exceeds 100%: because with every start of the game this amazing world is changing, the location of the locations (and, accordingly, the ultimate goal of our trip) will be quite different, and therefore, the interest of repetition will not be lost ever.

What can we say in conclusion? In my opinion, we have one of the first true masterpieces of computer art, though forgotten by the present generation, but only even more attractive for study. Despite the seemingly "primitive" graphics and "stingy", not In Search of the Most Amazing Thing creates some amazing atmosphere of "live the adventure novel", which is exciting, but very kind and beautiful fairy stories, where there is no savoring of violence, nor bored of saving the world, nor even something that we have anywhere seen. For all those who are able to appreciate the "austere beauty" really old games, it will be not just a gift, but an amazing gift from forever of past times, truly the Most Amazing Thing that can move the player into the magical world of This adventure. More than justified the highest score and a recommendation to all lovers of the beautiful.

Relive your old memories by playing In Search of the Most Amazing Thing free and online on your browser now.