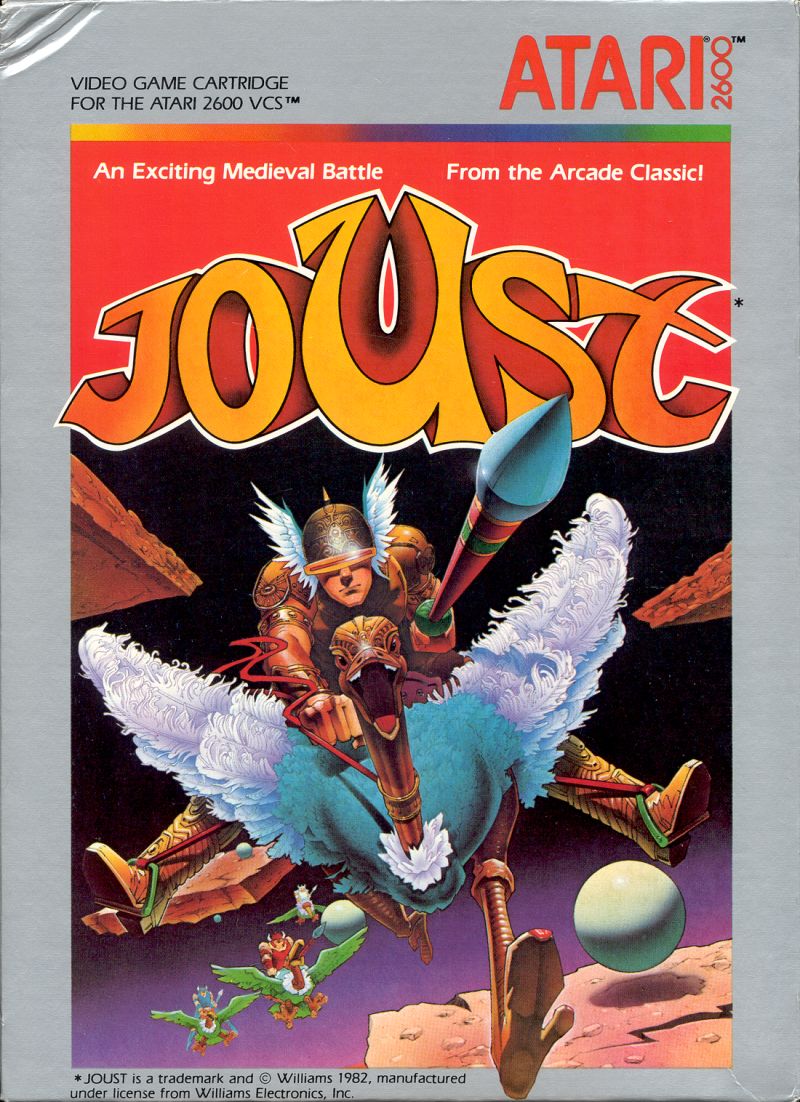 In 1983 Atarisoft released Joust. The game was an instant hit among all and played for years. Play it again online now.

Vintage arcade game, subsequently gave birth to numerous spiritual successors and remakes of all kinds. In Joust, you have to put on armor, to take his faithful spear, sitting astride a funny creature, resembling an ostrich, and prove to the world that you are a knight anywhere. "Joust ostriches?" – ask, and you'd be almost right. Almost – because our magical beasts aren't just fucking run fast and nice to fly. Accordingly, and fighting occur not only in horizontal but in the vertical plane.

Arena on which battles would be fought, never go beyond one screen: ran for the border on the right, you immediately find yourself on the left, and Vice versa. As additional elements in the field there are several hanging in the air platforms. You have to rapidly press the jump button to fly through the level and "RAM" their opponents from above. Touching the enemy with a spear from a higher position, you will immediately gain the victory, and he, falling with his faithful riding an ostrich turns into an egg, which should be as soon as possible to pick up, to prevent the revival of a defeated knight. From time to time, the action diversifies and becomes more complex – enemies become more, they fly faster, and lava at the edges of the screen may suddenly pop up a strange red creatures like tentacles. "Tentacles" firmly entangle the victim, not giving how to maneuver, and at the same time "erase" gets in the way of the platform and even the earth itself. But your most terrible enemy He will be is a huge, disgusting screeching pterodactyl, rapid dive on its prey, not giving her any chance to avoid bloody reprisals. To defeat this prehistoric giant can only be hitting him with a spear precisely into the mouth, but it's not easy.

Periodically the rules of the game are slightly changing, and on some levels you have to fight, and as soon as possible to collect the eggs, not allowing them to of them managed to appear severe riders. Additional stages provide additional points for a flawless performance – that is, you can't never fall off your ostrich.

Despite the apparent simplicity and straightforward gameplay, Joust has an amazing ability to make time fly unnoticed. So, start the game, only to watch her, you risk to stay in it for half an hour, an hour, two hours... And now it turns out that for virtual tournaments flew all night. Compounding the situation is that this arcade is one of the first that allows you to simultaneously play together. A good way to be chivalrous to resolve disputes with friends, huh? In General, if you are looking for something to do, don't look at the year of release, and just download and play – Joust worth it.

Play your favorite childhood game Joust online in your browser for free here.