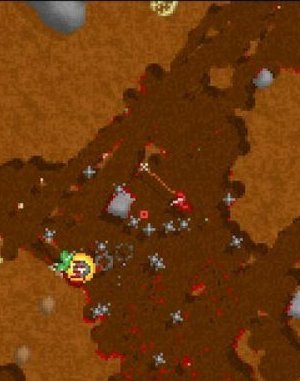 Click here to play Liero online
4.6 /5
This real-time version of Worms has you trying to kill your opponents with a wide variety of weapons at your disposal.

Liero is a clone of Molez.  While both games are clones of Worms, Liero takes the Worms thing a bit further with the name Liero meaning “worm” in Finnish. Biggest difference between the games is Liero’s splitscreen view and a possibility to play alone with the AI. Play Liero online!

In Liero, two players battle it out in destructable dirt between rocks and other obstacles. Weapons include classics like uzis and shotguns and a bunch of explosives like nukes and banana bombs. There’s also a ninja rope for climbing. Gameplay is pretty fast paced and there are no dull moments in Liero.

The game became a hit in the freeware scene.

At the start of the game, each player chooses 5 weapons from a vast weapons array, 40 in total. The weapons range from simple pistols and shotguns to bazookas and the ever deadly cluster bombs (known in the game as the chiquita bomb)

Players can dig through mud, jump and throw ninja ropes to navigate through the area. The players must seek each other out and destroy the opposing player. When a worm is hit, ridiculous amounts of blood spurts around. All weapons have infinite ammo, however they do need to be reloaded after emptying a clip. Reloading takes a few seconds, and during this time the player cannot fire. The more powerful a weapons is, the sooner it needs to be reloaded, sometimes after every single shot.

During the game, players can pick up crates with weapon power-ups. When collected, the weapon power-up replaces whatever weapon is in the active weapon slot.

You can play Liero online here, in web browser for free!