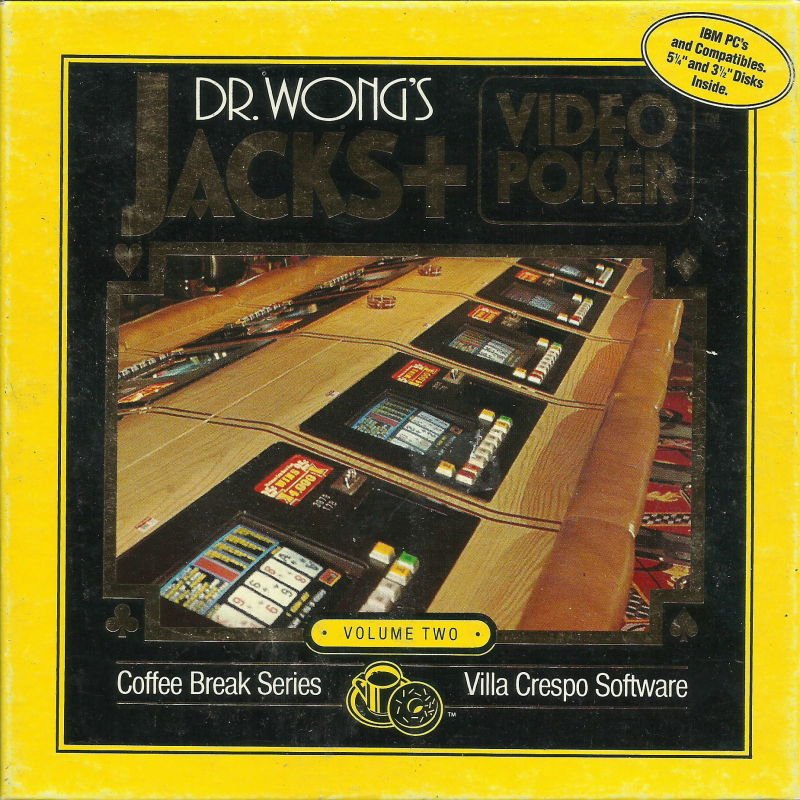 The second game of the "Coffee Break Series" by Villa Crespo Software, this time a shortened version of the gambling behalf of the other celebrities from this area, Dr. Stanford Wong. Despite the artificially sounding "Eastern" alias John Ferguson, a doctoral degree it is real, in Finance, in fact has Stanford University – are science and teaching, he eventually left, fascinated casino, but could write on this subject several books and programs. Including game – Yes, in contrast to Thomas Preston of "Amarillo Slim 7 Card Stud", "Dr Wong" not only posed for a photo from the user guide, but did participate in the development of the "Dr. Wong's Jacks+ Video Poker".

This game is one of the most primitive forms of poker – if the extensive collection of this multiplayer card game generally legally attributed videopoker for "one armed bandit" is much more reminiscent of a simple slot machine. Accordingly, we are exclusively alone: getting the default 100 of casino chips you need to stake from one to five of them (of course, all these numbers can optionally be changed in the settings), by pressing the arrows and "enter" or F3 to the maximum rate – and then the machine randomly gives us five cards. Our next task is to select those that we want to keep – the rest are thrown, after which, on the basis of the result, we either lose the bet or get a prize. Table required for winning combinations of cards is continuously displayed on the screen: because we play a variation of "Jacks+", pair of jacks is the lowest winning combination (i.e., Queens, kings and aces too, but dozens - no longer exists), for which we only get back your bet. "Two pairs" – there and then without reference to the grade cards graded higher, the initial bet is returned in twice the size, and so on until "Royal flush" five cards of the same suit in a row from ten to ACE inclusive, able to bring its lucky owner from the 250 tokens (at the rate of one coin) to as much as 4000 (for those who dare to high - five tokens).

Yes, this all – one round takes like, ten seconds. Of course, to lose (or even win) virtual money endlessly, causing each after the first round of the brand "statistical analysis" from Stanford Wong, clearly demonstrating our chances to get hands on a particular combination of cards. Finish the game by pressing F10 at the end of the round will be followed by a very pleasant for look the animation of the issuing machine of the pile of tokens according to the available in our disposal of the stock. There is a traditional Villa Crespo detailed help by pressing F1 (like on the main screen of the game and in the settings), and tutor-assistant, which can be set three modes: "Ask" allows you to query after the first hand advice about what the best cards to keep – by pressing F7; "Warn" includes the warning in case is not quite optimal from the point of view of the software algorithm of the act of the player, while "Show" means the automatic selection of the cards to "hold", so no need to think or to press the keys from 1 to 5 to indicate your own solution (the most suitable option for the lazy or the already quite beginners).

From the settings, apart from changing the bet size and the initial amount, it is worth mentioning the possibility in some cases to double your stake, set the "tolerance level" of a tutor (which defines when it should run prevention function) and the presence of multiple sound modes (for example, "Casino" includes a constant noise that simulates the interior of a gambling house, but for him to be sick hear other sound effects, so it is recommended to establish the switch in position "Game"). The music in the game is also available, but obviously for show – the number one short and repetitive melodies on the splash screen. The graphics are crisp, bright and large, and the figures of kings and Queens on the card even nicely animated, although 320х200 clearly inferior EGA mode of the same "Amarillo Slim 7 Card Stud".

Strictly speaking, the particular conspicuous shortcomings of "Dr. Wong's Jacks+ Video Poker" perhaps not, but too simple gameplay does not allow to refer the item to by far the recommended examples of the genre. Although if you are interested in simple as five cents a casino simulator, it was clean and cute and it does not require real investment and SMS – it is even possible to honor the second edition of "Coffee Break Series" to their attention.

Have you ever wondered what kind of video games were played in the good old days? Try playing Dr. Wong’s Jacks+ Video Poker online now and we are sure you will not stop playing again.