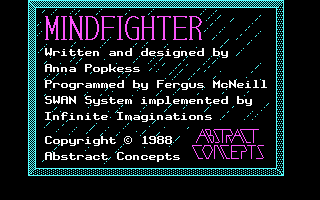 For anybody not a secret that Russian fiction is an extremely sad phenomenon, the abode of thousands of worthless volumes, and to publish it - so pointlessly destroy the forest cover of our planet, that the essence of a crime against humanity. But do not think that in other countries there are similar processes - many of the translated works, to put it mildly, mediocre, but they have gone through any selection process, after receiving the transfer. But translated, of course, not all books. Those that nobody looked, to stay at home. The book that served as the source for the text of the quest, was included with the game (probably so tried to get rid of the returned stores of the circulation) and held (just imagine yourself!) as many as 160 pages. It is an incredibly ambitious science fiction, bursting with pathos of post-Apocalypse and not actually having a plot (I must confess that I have read, not completely, but page forty - it's just unbearable). I must admit that the game was better. But only slightly.

Our protagonist - eleven-year-old boy Robin, who is not only clever, but also has a number of paranormal abilities, including telekinesis. Thanks to them, he goes in the not so distant future just before the start of nuclear war. New world, of course, harsh and ruthless, and Robin wants to eat, he did not eat or drink for a week (well, you understand what level here is fantastic). Him from time to time will meet other characters, which says nothing (probably, they were present in the book), and how Robin interacts with them (or rather, doesn't), that's really had to try to come up with. NPC, among other things, is able to move between locations, as the game is played in real time, and probably has some limitation in this regard.

Since the book has no illustrations, they decided to add in the game, but most of the monochrome images depict the ruins, and it looks like a mess of pixels.

But the interesting thing is that Mindfighter is a happy ending. Yes, that “u” and not “in” because directly with the game it is not associated: in the process of working on the project, the author (female) and the developer got married. It is likely that only these two people Mindfighter brought something good.

Do you want to relive your memories and play Mindfighter online in your browser? Play it now for free.