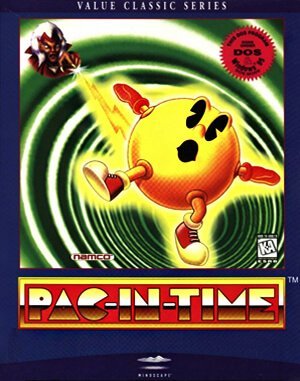 Click here to play Pac-In-Time online
5.0 /5
Pac-Man's nemesis, the Ghost Witch, has cast a spell on Pac-Man that has transported him back in time to the days of his youth in the year 1975. By fighting through snowy mountains and forests, swimming through water and swinging through trees, collecting fireballs and bubbles and facing enemies such as bats and ghosts, he must find his way back to his present day.

Pac-In-Time is a platform video game developed by Kalisto and published by Namco, featuring the popular arcade character Pac-Man. It was released in 1994 for MS-DOS, Macintosh, Super NES and Game Boy. It was released shortly after Pac-Man 2: The New Adventures, which brought about the change from the classic arcade versions of Pac-Man to the development of more complex and adventurous games. Play Pac-In-Time online!

Everybody knows what/who Pac-Man is from his heyday in the ’80s, but this time, we’re getting a whole new adventure of our little eater. Guess his stomach is full, ’cause there’s nothing much to eat here, only collecting points. This is much like some Indiana Jones adventure, only your little hero’s Pac-Man instead of Harrison Ford.

Pac-in-time is the US release of Fury of the Furries for DOS, Macintosh and Game Boy. It’s exactly the same game. Only the characters were changed: the not-so-known European Tinies (from the Skweek/Super Skweek/Tiny Skweeks/Brainies/Tinies games) were replaced by the widely known Pac-Man. However, SNES game, despite using the same basic gameplay mechanics, is an entirely new game using a different game engine and aesthetic.

You can play Pac-In-Time online here, in web browser for free!