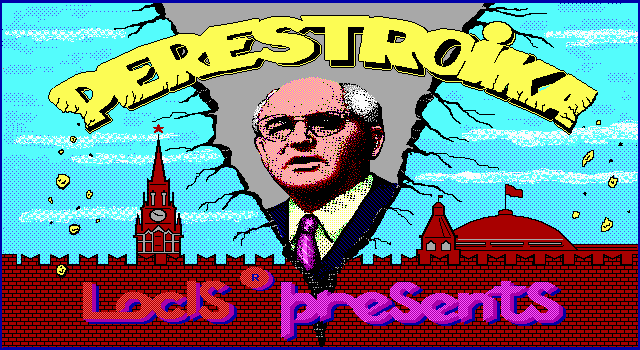 The famous developer LocIS developed a Action game called Perestroika in 1990. You can play this Top-down perspective game online now.

Restructuring Is the word at the end of the 80s and 90s knew every foreigner. The term appeared in 86-m to year and meant a complex political and economic reforms aimed at restructuring the economy. Time was, guys, difficult. For example, you want to market – be nice to jump a frog for some, picking up everything that is bad, on the “road”. Gape or stop the earth slipping from under their feet, and you find yourself in a swamp. Jump is not there in the swamp. Sometimes I think that I will manage to slip through, Yes there it was! The train left (bump drowned), and you are again in the swamp... All would be OK, but bureaucrats, damn them. Jump behind you, bloodsuckers. Don't have time to get away – will eat-not choke! In General, it was hard time, who didn't jump him, that was considered a capitalist, and his associates continued the business Restructuring. Some even went all the way, but there is a theory that they were all “cheaters”...

But seriously though, Perestroika is a Russian Amateur game project. The gameplay is very simple. Driving a small lyagushatnik being, you need to hop level by level starting from the leaf of the Lily to the final. Intermediate leaves are constantly decreasing in size with different speed to extinction. From time to time in the empty places new leaves appear. Your personatum chasing evil beetles (their number depends on the level number). Contact with water or evil beetle leads to death and the next attempt to pass the level. The lilies can appear different balls that embodies bonuses or penalties. All this is quite fun, but the game is primarily famous national color (or rather the abundance of "cranberries"). The authors called the project in the spirit of the time (1990) - "Perestroika", the main character, “Democrat”, villains – “bureaucrats”, an extra life – “associates”, and the final of the Lily – “the big way”. Full list of “actors” appears before each game.

Alternative project name – Toppler. Apparently, because of the similarity of the protagonist with a character from Tower Toppler widely known (in narrow circles) of the game. The frog of Perestroika later became a symbol of Nikita.

Play your all-time favorite Perestroika free on your browser here.