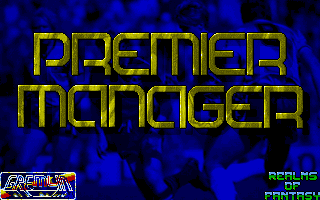 Play Premier Manager online now. This game was released by Realms of Fantasy in 1992 and has fantastic Managerial / Business Simulation gameplay.

The first game of a series of managers from the company Gremlin, which, incidentally, is very rare.

The player acts as Manager of the football team fifth in the League, and his task is to guide your team as far as possible, ideally before the Premier League and victory in it. But it is only one goal, one possible version of events, because the main thing for your hero in the game is money and personal enrichment, so if you have such possibility it is possible then to go to work in another club, more rich, where your income will be much higher (but, of course, just so no one will suggest, therefore, before any definite results of the command to bring still have).

Will have to deal with at the same time coaching, that is to organize training and to come up with a tactic, the actual management, i.e. to transfer players to other clubs looking for new talent wherever possible, not forgetting to conclude agreements with sponsors, and managing their own stadium, the main objective in the development which is attracting more fans to the games. The main element of all this is the transfer – sometimes extremely important not to lose a talented player (and each player, there are many indicators to assess its class), of which his home club for some reason sells, as other clubs, your opponents can also buy players (but at the sale everything is almost always exhibited only mediocre) and probably will not to miss your chance. If the situation is very critical, you to buy anyone you can even take the credit.

The match you almost not shown, but a small window to display specific scoring chances still there. Manage the match in your power to give the players to change tactics and make substitutions. Have the ability to play four with one computer (but the matches one and the other pairs of players will take place at the same time). The main part of the game text, but the menu is decorated very nicely, there's even a lot of pleasant things in different submodes. For example, to start a dialogue with another club or sponsor they have to call and this submode is designed as a telephone and a diary: the last recorded room, and before the beginning of the conversation the number to be dialed manually. These seemingly little things do create a unique atmosphere, which, it appears, may even be in the game of this subgenre. In fact, including why the game (especially considering its rarity) is a classic and a real artifact, warmly recommended to anyone interested in management games.