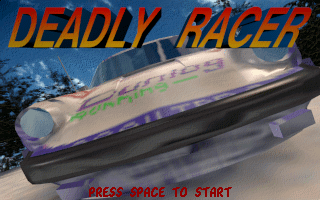 A DOS game was developed by Flair Software Ltd. and then released by InSide Team in 1994, the game was called Deadly Racer. Now you can relive the memories by playing it online here.

A little-known stunt of the old race.

In this game you select one of ten cars (Toyota, Porsche, etc.), you must drive through four different tracks, competing against your rivals and come to the finish line first. The matter is complicated by the huge number of obstacles on the roads, so the challenge is to reach the finish with minimal damage; in fact, "gimmicks" in the game – are not that other, as aspiration of these obstacles to avoid. On the machines I would like to note that though they are made almost like exact replicas of real prototypes, but technically are not, since the machines for this game was not licensed (this is why Toyota Celtica, for example, there is Toyosa Cerica).

There are three game modes – practice, single race or championship (but no major differences between the last two there – except that in the championship of the route traversed sequentially, and when the final score takes into account the time spent on each of them). Before you start, you can choose automatic or manual transmission. Fuel in the game of course, driving physics is very realistic for its time. Maps of the route in the game, so you should look for the yellow arrow on the screen, in order to be sure in his way.

The game uses an improved engine Rally Championships, which means that we expect an excellent, if somewhat unusual graphics and perspective review. Look at your car we would like in the "big ISO" and almost full 3D, with a very clear portrayal of the environment, digitized (!) car models and well filled with a variety of weather effects (e.g. rain).

Overall – not a hit of course, but quite decent and kinda old racing game that will surely appeal to most fans of the genre.