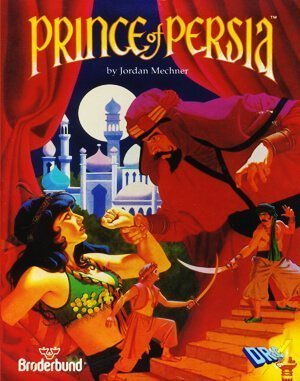 Click here to play Prince of Persia online
4.0 /5
Defeat evil sultan, free the princess and save the day. In 60 minutes ...

Prince of Persia is game by Jordan Mechner. In this game you will become a young prince which wants to save the princess from the evil sultan. You will need to go through 12 treacherous levels to free the princess.

Prince of Persia is a 2D platformer that is commonly regarded as a progenitor of the cinematic platform genre. Rather than following the more common jump-and-run mechanics, it focuses on careful advancement through fairly complex levels, emphasizing the protagonist’s vulnerability and survival aspect. Rotoscoping technique is used to give more realism to the animation of the characters’ movements.

The protagonist must avoid deadly traps, solve some simple jumping and environmental puzzles (such as stepping on pressure plates to raise portcullis), and engage in sword fights with the guards. The player character has an infinite amount of lives, but has to restart at the beginning of a level each time he dies, and must complete the game within an hour. The hero starts with three units of health, which can be replenished with small health potions or permanently increased with large jars.

Palace dungeons which you will need to pass are covered with all kinds of traps. And you will not be alone in the dungeons. You will meet several guards. The duels are not difficult if you know how to defense yourself.
There are several kinds of potions in the game which can increase or decrease your health.

Prince of Persia saves the princess!

And the best of all, you have only one hour to finish this game. So I can guarantee that you will not finish game for the first time. Just because without level knowledge 60 minutes are really not enought. 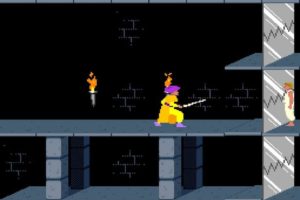 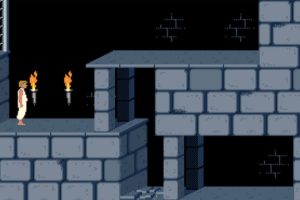 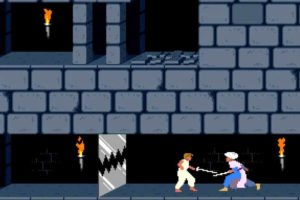 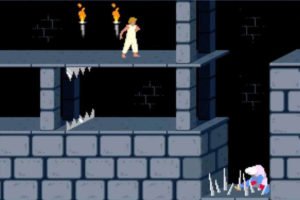 Crime Does Not Pay