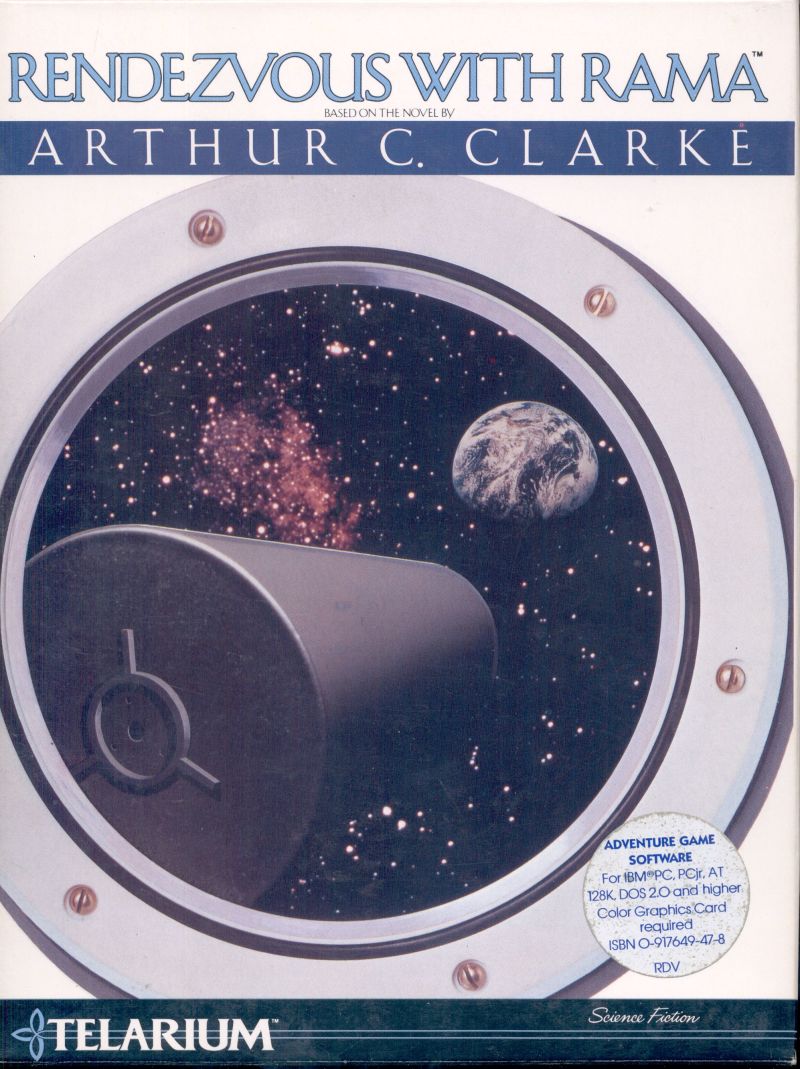 Released in 1985 by Trillium Corp., Rendezvous with Rama has an excellent Interactive Fiction / Text Adventure experience. You can play in online now.

Meteorite, at enormous speed approaching the Sun, the first time didn't promise anything interesting. Alien from outer space interested in only astronomers, but also for them, the phenomenon was largely private. The closer the heavenly wanderer approached the Earth, the better able to determine the dimensions and properties. And once the calculations have reached the desired accuracy to confidently say mysterious meteorite hides much more secrets than it seems. Dubbed the observed object Frame, in honor of the Hindu God, scientists to redouble its efforts are taken for observation. Launched in the sky allows to obtain the first detailed pictures at this point, the opening of the discharge goes into the everyday historical: it turns out that Rama is not a meteorite, but the enormous size of the cylinder, obviously made by intelligent beings. Prior to its collision with the Sun for the last few weeks. Experience and culture of other civilizations, beckoning human finger, going straight to oblivion. What to do? Of course, to equip an expedition, which aims to draw the maximum knowledge from the alien. The role of captain of this expedition and will take the player. When does a scientific mission was a success or a failure depends entirely on you.

Rendezvous with Rama is an interactive text adventure, just following the letter of the famous novel by Arthur C. Clarke. Carefully studying the available information, you will have to analyze the situation and take all necessary steps to have the expedition on Board of the spacecraft of other races was a success. Information about surrounding objects serves not only as text – to the aid of made in the EGA-palette image, showing some detail of all of that is before the eyes of our character. Each screen object has its own picture, which seriously helps to provide a General picture of the studied space.

Office of the hero, as is customary in text adventures, by entering certain commands. In RwR set of such commands is extremely simple and quick, so the game is unlikely to cause problems even for newcomers of the genre. Of further interest is the ability to issue commands to other members of the expedition. The only way to solve some of present in the game puzzles.

By the way, about puzzles. As one would expect from a game with such a plot, mainly you have to look for ways to interact with all sorts of hidden on the Frame the artifacts of other civilizations. To understand them is difficult because we are dealing with a completely different mind. This mind is far superior in the development of our own, as evidenced by the very existence of the Frame, and its culture and history so different from ours that a superficial examination of the items will not give you anything at all. Your best friend will once again be the scientific method of trial and error – however, gamers are no stranger to this, right?

Separately want to thank the developers for a thorough shift in the form of all the key moments of the novel. On the expedition ship you'll find not only people, but also simpow – extremely intelligent chimpanzee, proved excellent helpers of the human race. Inside the Frame, you have to how to walk and to fly secretly carried by one of the members of the expedition "the Dragonfly" – a light airplane, which in the low gravity turns out to be the perfect tool to explore the farthest corners of the huge complex. Is the game and the countdown to the inevitable collision of the Frame with the Sun, therefore have to act without undue delay.

To summarize, we can say that, in addition to the connection with the great work of the famous science fiction, the RwR doesn't feature something unusual, but some attention the game deserves. For the first time we are given the opportunity not just to read about the unique expedition, but also to personally lead her crew behind. And it may well be that you will achieve even greater success than your colleagues from the novel by Arthur C. Clarke.

Relive your old memories by playing Rendezvous with Rama free and online on your browser now.