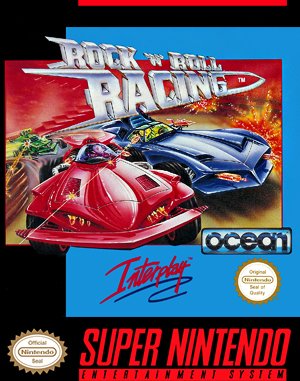 Click here to play Rock n’ Roll Racing online
3.4 /5
Rock your way to the finish to the beat of righteous metal using all kinds of special weapons!

Rock ‘n Roll Racing is an arcade combat racing game. Combat plays a heavy role in the game, as each car has a frontal weapon, such as a laser or missile, and a drop weapon, such as spikes or mines. As you complete races, you get more money to upgrade your car. The soundtrack features famous rock tracks such as “Born to Be Wild, “Bad to the Bone,” “The Peter Gunn Theme,” “Highway Star” and “Paranoid.” Play Rock n’ Roll Racing online!

The game is very similar to RPM Racing. The later released PC version is an official release, but based on the SNES version incorporating the ZSNES emulator and limited to three tracks.