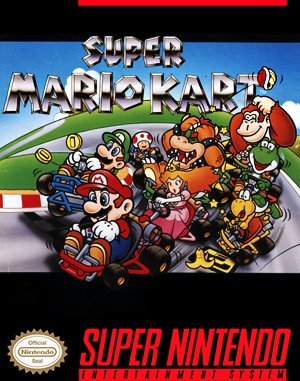 A collection of Super Mario characters, including Mario, Luigi, Yoshi, Peach, Bowser and Donkey Kong Jr., are out to win the Super Mario Kart championship. Using Mode 7 scaling, the first true kart game on the SNES has you collecting coins to boost your speed while using shells and bananas to stop others on the track. Play Super Mario Kart online!

There are 4 cups in all to race for, Mushroom Cup, Flower Cup, Star Cup and Special Cup, each with a selection of tracks to race on (based in Bowser’s Castle, Super Mario World and more). Plus, a 2 player battle mode is on offer, where the first to pop the three balloons wins.