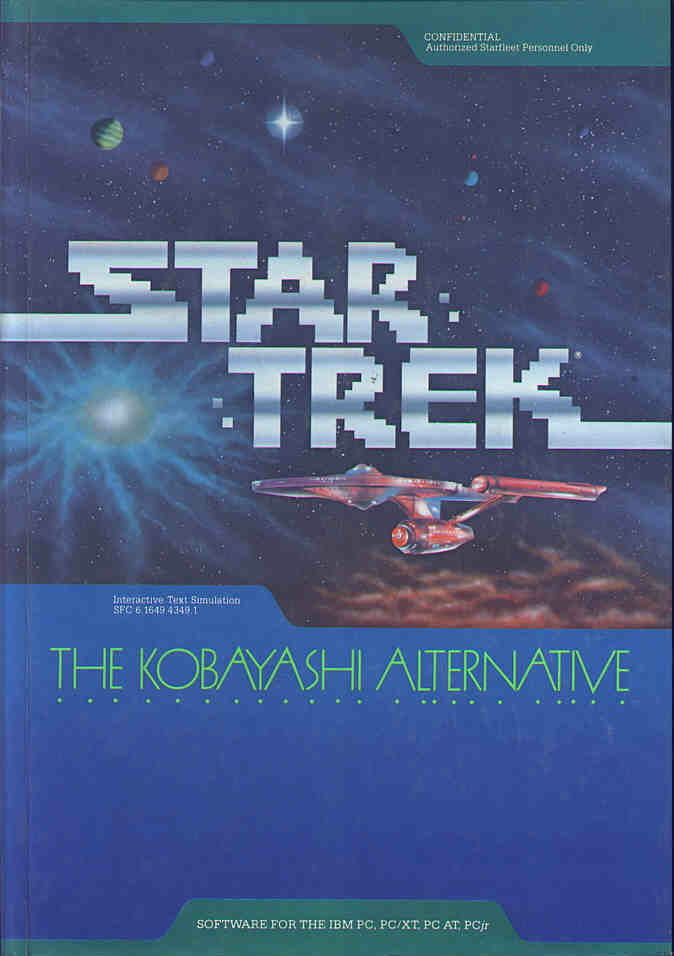 In 1985, Star Trek: The Kobayashi Alternative was released by Micromosaics with a very interesting Interactive Fiction / Text Adventure. This you can now play online.

Fully text adventure, which is the second official game of the legendary series "Star trek" (Star Trek) and a direct sequel to the first - the Promethean Prophecy. As in the case with the game, do not believe it is possible and justified in any detail under the brief descriptions touch on background and analysis of the universe ST; suffice it to say that successful completion is highly desirable at least basic familiarity with it.

At this time, you already play a direct role pick, and most of the action, in contrast to the Promethean Prophecy, occurs in the cabins of the starship enterprise. The goal is to find, by order of Starfleet Command ship "Heinlein", missing in the constellation of the Triangle. Actually, I should say that the plot - if you compare, again, with the first game - a rather conditional: it creates the impression that the game did "the process" rather than "result".

The interface remains the same, no graphics, most of the screen is reserved for detailed and accurately describes the status of the text (in some cases, however, which may be brief), below is a line for entering commands. However, because the story now takes place mostly on the ship, it added two new Windows: the condition of the vehicle (green at the bottom of the screen), and dialog to conversations with meet the team members (in black above and to the right of the command line). The only simplification in comparison with the previous part - the motion commands can now be entered manually, and push instead on the arrow buttons. The syntax, however, it became even more difficult for management to introduce more detailed proposals than on Prometheus 4, while accurate, since the dictionary is complicated in quality but not in quantity, so to speak. In addition, added a small item if not simulator ship, simulator, captain: you have access to the various systems of the enterprise, including its information database, which contains files on all your employees, can personally give the orders for the landings and vysotkah on the planet (and it will have to do) and so on. All this time, and greatly expands, and as significantly complicates the gameplay.

There are two downsides. First, what is happening, despite the seeming freedom and infinity of the world, strictly limited in time - if you don't complete the mission by a certain date, you lose; it could be forgiven, if there were referred to the formal infinity, the charms of which actually go out, and enjoy. Second, you can forgive not only that, but - of course - increased complexity "parsereg assault", but to forgive the actual incomprehensible and messagetest star Trek is already difficult. Because, sad as it is to admit, the question of the "Why are we here, what's all this, what should I do?" there, he is born in oldeumiseu head.

We have, therefore, a "second worst". The game in no way is not bad, in its own way even very attractive (including for lovers of something very complicated), but still, it's not *that* text "Star trek", which is able to awaken the imagination and make you believe that we actually wore the uniform of the Federation...

Relive your old memories by playing Star Trek: The Kobayashi Alternative free and online on your browser now.