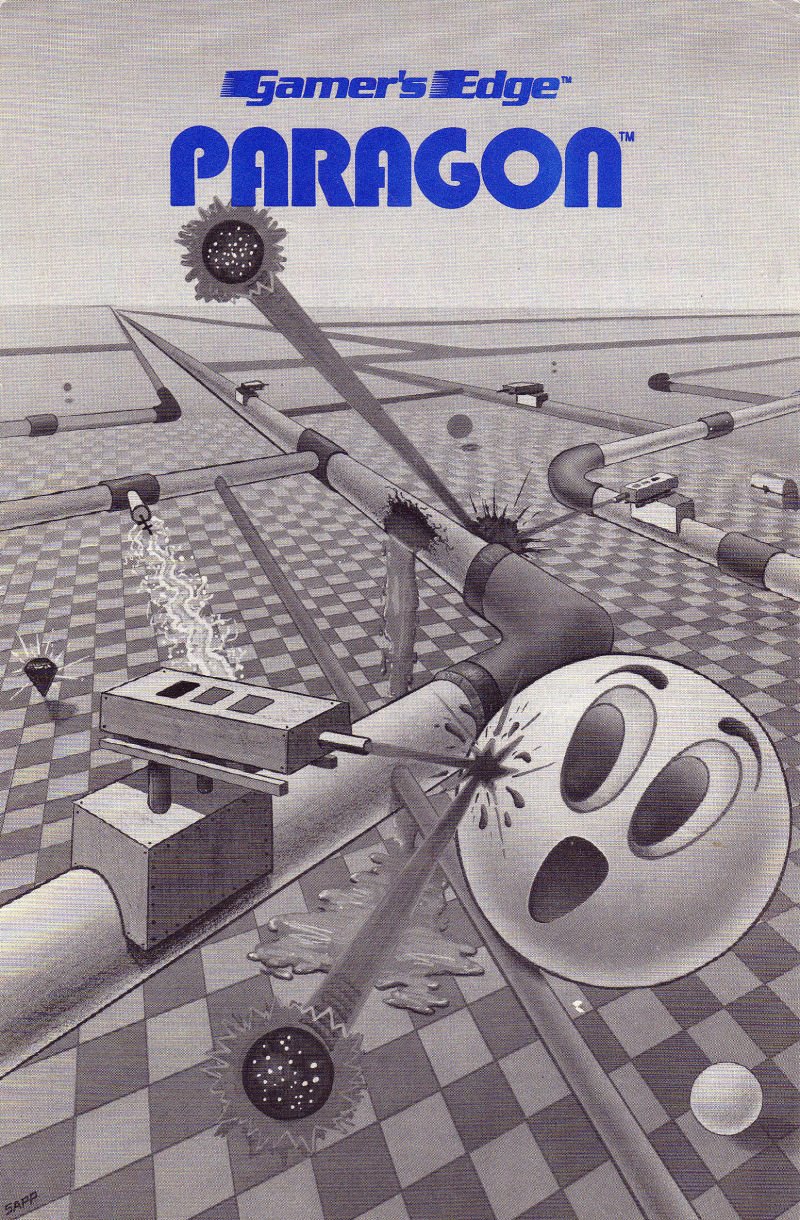 Froggman released a DOS game named Street Ball in the year 1991. If you are interested in playing this Arcade online, then click here.

Arcade and puzzle at the same time, which is a port from the C64 (where the game was released five years before the PC under the name Paragon). The essence of the game is quite simple: some likeness of a maze of city streets (although in reality it is not very reminiscent of the streets) moves (under your control) live (!) the blue ball, which must avoid obstacles and collect bonuses.

Why does this remind of the street – because each level is a chaotic accumulation of elements of the brick walls interconnected by reinforcement rods (difficult to describe more precisely, it is necessary to see - this could be the wire). The ball automatically moves back and forth only these bars, however at any moment it is possible to "release" (it is already done by you), that he was on the territory of the maze with the aim of taking any bonus. After a few seconds it automatically switches back to this or another piece of rebar (although before that can podaetsya on the wall, and maybe, if you are not lucky, generally "stick" to another wire), so it is important to calculate not only the direction of flight of the ball, but also to determine the desired moment of time (this is the element of the puzzle).

The levels are not as secure as it may first seem: there are burning stars, lasers, the "evil" orbs and other non-protein entities, and the number of lives is limited. The effect of the enemies on the ball is different: lasers your shots only takes bowl hit points, then as mentioned sprockets, electric field, arc plasma ring and the enemy balls kill ball with one touch. If these "arcs" (or "electric bolts") – hardly probable not the most interesting enemies in the game that need to stay a little more.

The fact is that their is two types: one charged constantly, while others from time to time turn off and again turn on. The first type there are blue circles, and if the ball falls into one, then the arc will turn off (or turn on if it was off before). With "variables" arcs harder, but it is important to remember that in the case of separation of the ball from the rod a status of this arc will not change (that is, logically, the ball should be released when the arc is off). We should also mention the only moving enemies – those "evil" black balls, which seem to be quite intelligent and sometimes can hit you even at a distance.

Here it is worth noting that one of the few differences from the original game is that the game screen is visible is only a small part of the level, so when you move to the edge of the screen, you never know what awaits us there. Despite the fact that the gameplay appears simple, but in reality very complicated, the game has bonuses in the form of extra lives, and that is extremely rare in such arcades, the ability to save the game at any time, at any level and in any quantity; also there is always the opportunity to put the game on pause to see your current points. Finally, from the game objects there is another teleporter, which can be both useful and harmful.

"Plot" game, many types, and before the beginning of each level always shows you exactly what bonuses and how much you must collect to complete it successfully. Once that is done, open a hole, which is the transition to the next level; all levels in the game twenty, and everyone – much more difficult the previous one, in the "upper" levels and increases the speed of the game, so playing without saving is almost impossible. In the case of passing the whole game can be replayed, but at a higher speed starting from the first level. To summarize this point, the game is VERY difficult, so the possibility of saving must not be misleading. It is a real masterpiece of the "same" difficulty, which we all love old games.

The graphics in the game, as written in reviews it does not much differ from the original in 1988, and if this is true so the game was just a miracle of beauty for their time. However, she and 1993 looks great, can't even take into account the point that in games such graphics to assess generally not worth it. Verdict – simply excellent, amazing, insanely hard and yet insanely addictive game, to break away from is positively impossible. More than deserved ten points and sincere recommendation to all who are nostalgic for something really complicated.