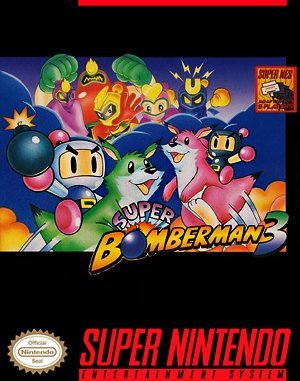 The third bomberman game in the SNES series. This game was an overhaul of the entire system of bombermans from before. Again there are new levels and a new story but there are also a lot of new features. Play Super Bomberman 3 online!

Super Bomberman 3 adds in 5 player support using a multitap and the extra controller slot. The “revenge” or “miso bomber” feature was introduced in this game. That is when a player dies they can still throw bombs in from the sidelines in an attempt to swap places with a player that is still alive. Many new powerups were added in this game including the Kangaroo which in addition to giving a player and extra hit allowed them to have some extra ablity including jumping, laying rows of bombs, and high speed running.

Players are also not limited to the traditional Bomberman. There is a wide selection of different characters that the player can choose from.