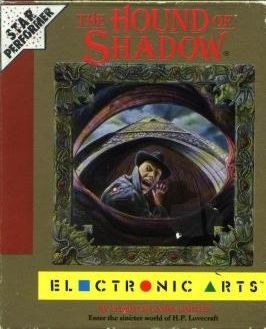 Click here to play The Hound of Shadow online
5 /5

With many different features and various levels, The Hound of Shadow released in 1989 hit the right chords right from the beginning. Play this excellent Adventure game and online now.

The Hound of Shadow description

Tremble, fans of tentacles on the face! Happily so strap yourself in, because this game is very much askance at the works of HP Lovecraft, what the authors reported in the user manual and confirm the image of Cthulhu on the logo. Yes, we are waiting for a text adventure devoted to occult topics.

But before to plunge into a dark adventure, we are going to create a character, and not simply type it's name than it is restricted in many similar games (you can select and preset, but it will deprive a substantial share of the fun). The local system of generation of characters would be jealous even some RPG - we have to distribute the abilities among the dozens of skills. Yes, it seems clear what is responsible for what, but when, where and how it is useful is a mystery, at least until the first attempt of passing.

Common launch, the game has depending on the features of our character one way or the other is in London 1920-ies and accidentally gets to meet a kind bed lovers povezati spirits of the dead, old gods and other evil spirits. It seems to be nothing special, the usual mischief, but soon after such “fun” get-togethers we find that fell under the curse, a Hound of the Shadow is following us and will certainly catch up if we don't do something. But how to get rid of demonic attention? Alas, a simple trip to Church and reading the “people” of exorcisms to get rid of it - will have to visit library to consult a serious (to the extent applicable to the subject) specialists and take the time - launch countdown before the onset of the inevitable, the reality and inevitability which no doubt. Yes, the game has a limit on the number of moves.

To escape, we will be helping a very good parser (authors threatened to series and diligently worked on) and those talents that we pumped from the character when it is created. It's good that they are often applicable in parallel: for example, in the case of chase, if a character has no driving skills, but is able to ride a horse, you can (and should) prefer a horse car.

The authors doubted there were able through words to convey Lavrovsky atmosphere (it's really a question), and decided to add periodically displayed in certain places EGA-pictures. And they are really scary, but in a bad way, not the one that wanted to lay the developers.

Verdict: ambiguous text adventure game with unparalleled character creation system that caters not only to fans of Cthulhu. Maybe not like how it was very controversial.

Play your all-time favorite The Hound of Shadow free on your browser here.