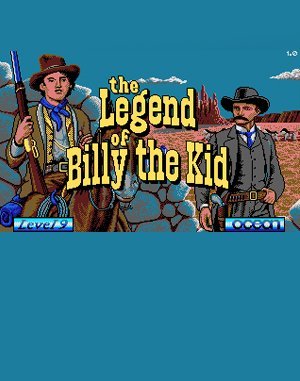 Click here to play The Legend of Billy the Kid online
5.0 /5
The Legend of Billy The Kid is a great action/adventure hybrid in the style of Cinemaware's It Came From The Desert game, except this time you can play as either the legendary outlaw, or Sheriff Pat Garrett, the sheriff who hunted him down.

Unfortunately Tunstall is murdered and the two disagree how to proceed: while Garrett wants to strengthen law and order, Billy the Kid sets out to avenge Tunstall the hard way.

The Legend of Billy the Kid game description

The player chooses between the role of Billy the Kid or Garrett which changes their goals, e.g. as Billy the Kid the player needs to build up an outlaw army. During the game, the next destination is chosen through an overhead map, e.g. the city of Santa Fe or a camp of Native Americans. In cities, the player can move, enter different buildings and talk to people in order to receive hints what to do next (sometimes hints are also received when entering one of the other locations on the map).

Some people need to be bribed with money which can be earned with certain actions like robbing a bank. Often the character has to engage in action sequences, e.g. a shootout in which crosshairs are moved over the screen to shoot enemies as soon as they leave their cover. When the basic goal is reached, the game culminates in a shootout between Billy the Kid and Garrett.

Play The Legend of Billy the Kid online

You can play The Legend of Billy the Kid online here, in web browser for free!